October 17 2016
41
After the end of World War II, the popularity of pistols with attached butts quickly waned. This was mainly due to the wide distribution of submachine guns and the appearance of their compact models, which were usually more effective in combat and cheaper in mass production. Apparently, one of the last mass pistol-carbines, which possessed a holster-butt, was the Soviet Stechkin automatic pistol (APS), which was put into service in 1951 year.


The fate of this pistol by outstanding Russian designer Igor Yakovlevich Stechkin was an illustration of the sunset of this concept, which flourished in lush color in the first half of the 20th century. In terms of firepower, the APS pistol was significantly inferior to submachine guns and submachine guns, it was quite expensive to manufacture, and its massive holster-butt only interfered with the fighter in critical situations, for example, when it was necessary to quickly leave a tank or other equipment. At the same time the gun was nevertheless quite successful and still retains a certain popularity. Here it is only used and used for the most part without the butt, with which it was originally designed.

The Stechkin pistol was adopted by the Soviet Army in 1951 year. It was an automatic pistol with the possibility of firing bursts. The development of the gun was carried out from the 1948 year, the work was led by a young design engineer Igor Stechkin, who joined the CDB-18 in the same year. The first prototype was ready in 1949 year. After carrying out factory tests, then carried out modifications and subsequent military tests, the gun was put into service under the designation APS (Stechkin automatic pistol). 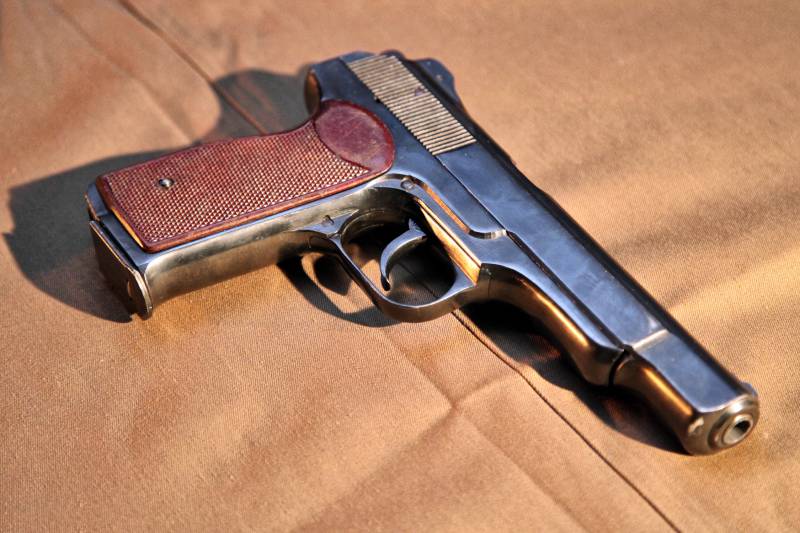 For his creation, a designer gunsmith was presented to the Stalin Prize. From a pistol it was possible to fire both in bursts and single shots. Firstly weapon intended for arming the officers, sergeants and soldiers of combat vehicle crews and individual army specialties who were not relied upon to issue a SKS carbine or AK assault rifle. At the same time, it was justly believed that a PM pistol for the purpose of their self-defense in the event of a possible clash with the enemy would not be enough.

Automatic gun APS works according to the scheme using recoil with the free course of the shutter. The pistol was completed with wooden, and later with a plastic holster-butt, which was needed not only for more accurate shooting over long distances, but also for storing weapons. Also, the presence of the butt allowed to conduct automatic fire, reducing dispersion when firing bursts. In order to conduct more or less heap fire in automatic shooting mode, the shooter had to hold the weapon with both hands and fire only in short bursts. This was necessary, as the weapon strongly led up already after the third shot. Automatic pistol fire while holding with one hand to achieve acceptable dispersion was possible only at a distance of 5 meters. In the pistol grip there was a mechanism for slowing down the rate of fire, which also served as the self-timer function. The maximum rate of fire was 700-750 shots per minute, the practical or combat rate of fire was almost 10 times less.

In the APS, a rather rare solution for pistols was used - a magazine with a two-row cartridge output. The cartridges themselves are arranged in it in two rows in a checkerboard pattern. Such a system requires the correct combination of all elements of the system, such as the shape of the magazine and the bevel angle of the chamber, as well as the high precision of their manufacture. At the same time, the very form of the cartridge 9x18 mm was a rather big obstacle. Igor Yakovlevich Stechkin spent enough effort on the design and bringing to smooth operation of parts related to the supply of cartridges. The result of his work was that he managed to achieve reliable operation of the gun even in extreme conditions of operation. Even nowadays, the largest American and European manufacturers of short-barreled weapons are trying to use shops that are more reliable in supplying cartridges with a single-row output, but are more difficult to manufacture and inconvenient when equipped. The side walls of the store in the MTA have windows. After all cartridges are used up, the magazine feeder raises the slide delay. The process of the slide lag plays the role of a reflector of a spent cartridge case. Magazine latch located at the bottom of the pistol grip. 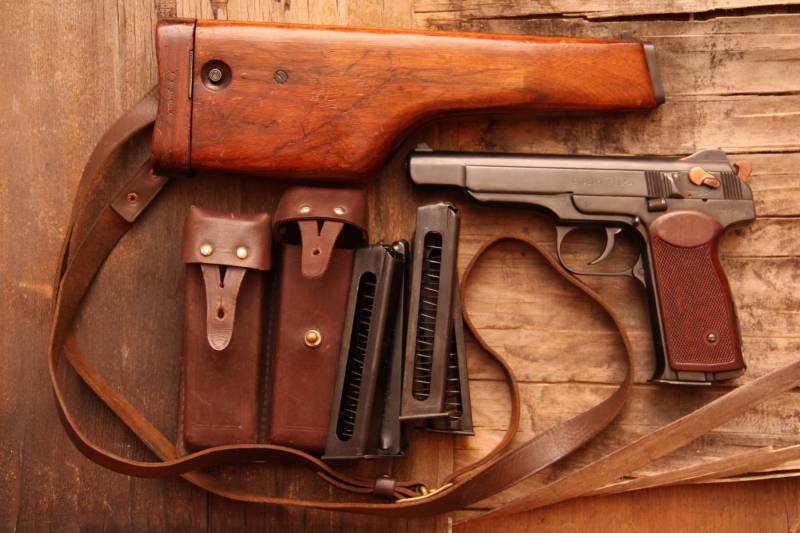 Stechkin pistol trigger mechanism allows continuous and single fire. Flap fuse at the same time is a switch and fire modes. The pistol fuse has 3 positions “ex.” (Weapon on safety), “one” and “aut.” (Firing single shots and automatic fire, respectively). When the APS is fused, the firing pin is locked, as well as a smooth descent of the trigger (in the event that it was cocked). If the fuse is turned on, it is impossible to retract the bolt to the rearmost position and manually trigger it.

In the handle of a Stechkin pistol, a slowdown rate was mounted, which includes a retarder with a spring and a transmitting lever moving vertically. When the shutter moves back and forth, the moderator takes some of its energy from it, increasing the cycle time of the automation. The appearance of such a mechanism has increased the stability of the pistol when firing bursts, as well as the accuracy of fire. When the shooter is pushing the trigger, the trigger pull raises the uncoupler, which turns the sear, releasing the trigger. When moving the valve releases the disconnector, so it is withdrawn from engagement with the sear.

With automatic shooting mode (auth.), The retarder is able to rise to the highest position, but only when the pistol shutter is locked. Rising up, the moderator with its protrusion raises the trigger pull, and with it the disconnector, which turns the sear. That is, the moderator plays the role of the self-timer. When the trigger is released by the shooter, the trigger thrust stops interacting with the retarder. At the “pr.” Position, the fuse reliably locks the drummer in the rearmost position, locks the trigger by turning the sear, and with its edge engages the bolt with the pistol frame. Due to the interaction of the end of the trigger with the protrusion of the trigger of the weapon can be fired self-platoon. 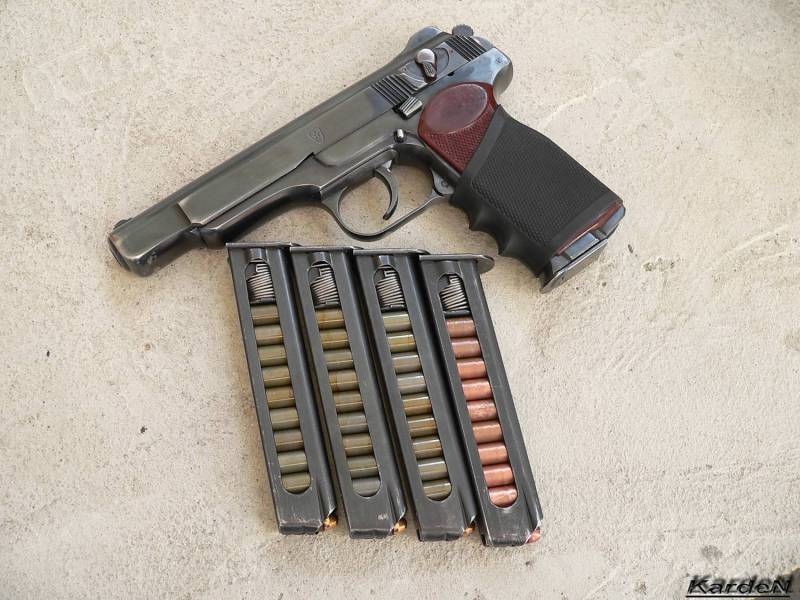 It should be noted that the concentration of a number of mechanisms in the pistol grip caused the APS center of gravity to move backwards. This could have a negative effect on the accuracy of shooting with one hand, if it were not for the mass and return spring of greater length compared with the Makarov pistol (PM) (a guarantee of smoother operation of the automatic weapon). As a result, the accuracy of shooting a Stechkin pistol with single shots increased significantly. The operation of the trigger mechanism of the Stechkin pistol, like that of the PM, corresponds to the “trigger with a warning”: the shooter feels an emphasis after the preliminary free running of the trigger, after which a short, slightly larger force will be enough for the trigger.

The gun has a sector sight, which is designed for 25, 50, 100 and 200 meters shooting distances, although mostly effective aimed fire can be fired at distances up to 50 meters. The initial speed of a bullet is 340 m / s. Due to the presence of a magazine that holds 20 cartridges, the gun has high firepower. Stechkin automatic pistols of the early series were distinguished by the presence of non-chrome-plated barrels, as well as a slightly different configuration of the retarder and the shape of the slots for fastening the holster-butt. Later, the barrels of the APS began to chrome.

The effective firing range for the MTA is:

- when firing single shots with an attached butt holster - 150 meters;

- when firing bursts with an attached holster-butt - 100 meters;

- when firing single shots without a holster-butt - 50 meters; 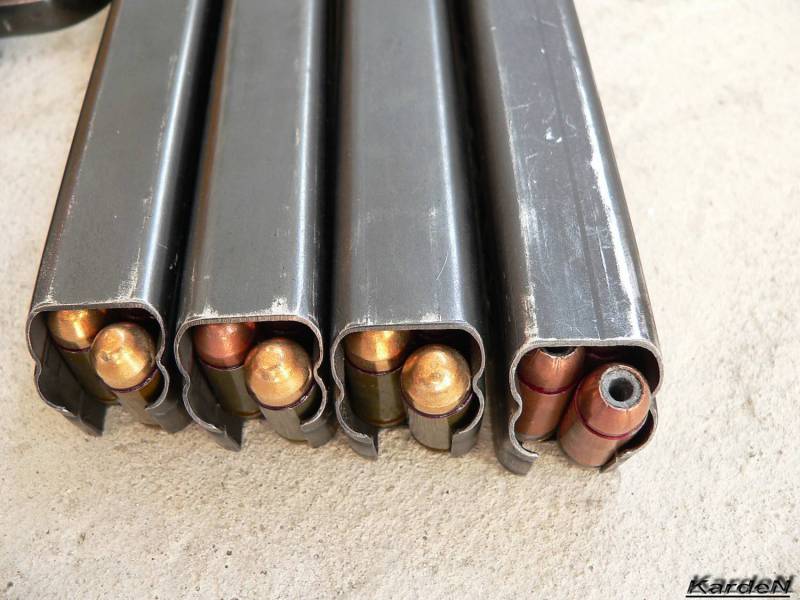 To carry a Stechkin pistol, a rigid wooden or plastic holster-butt is used, which joins the weapon when it is necessary to conduct continuous fire. The MPS of the early editions were equipped with a wooden holster, which was quickly replaced due to low service strength with a holster made of plastic AG-4. In the lower part of the holster-butt there is a metal tip with guides and a latch, which is necessary for attaching the holster-butt to the weapon. The holster-butt, as well as the first sample of Stechkin’s automatic pistol, was designed as a pistol. FN Browning High Power. It consists of a body, a folding hard lid and a tip with a latch intended for mounting on the handle of the gun. APS is fixed in a holster by means of a spring located on the inside of the cover. Rubbing and a screwdriver are also worn with the weapon. A push-button lid latch and an open grip of the weapon shorten the removal time for the shooter. The holster is transferred on a belt over a shoulder, and spare shops to the gun are transferred in a cartridge pouch.

One of the main advantages of the Stechkin automatic pistol was the low recoil and the rather small toss of weapons when fired. This quality of weapons, in combination with high accuracy, allows the shooter to conduct high-speed shooting with single shots, achieving great accuracy of hits. This advantage of the pistol is especially important in the melee. It also manages to control the flow of ammo Due to its simplicity, the gun is easy to maintain. At the same time, APS has a significant margin of safety. Shooting some samples is about 40 thousands of shots without cracks in the bolt-casing and any serious damage to the gun.

The gun MTA adopted on December 3 1951 of the year. The gun was intended to arm the crews of various combat vehicles, the first numbers of heavy weapons calculations (heavy machine guns and anti-tank grenade launchers, machine guns, artillery guns), as well as individual self-defense weapons of platoon-company officers who were directly involved in the hostilities. 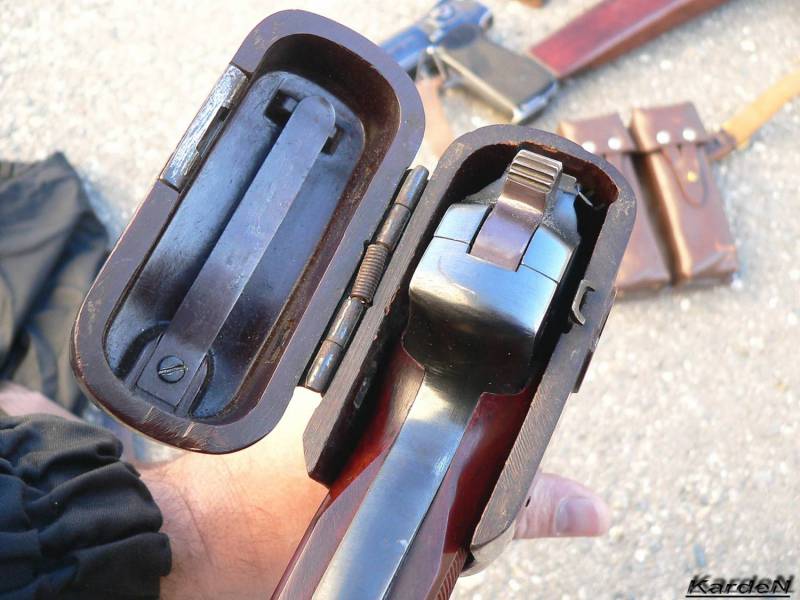 But the use of an automatic pistol in the army showed a number of shortcomings: the large size of the weapon, the inconvenience of wearing a massive holster butt, the impracticality of automatic fire. The pistol grip with a small angle of inclination takes some time to get used to it and is almost not suitable for “intensive” firing from a pistol without thinking. Most officers considered this automatic pistol uncomfortable and excessively large, especially in everyday wear in peacetime conditions. Together with the APS, it was necessary to wear 4 fully equipped magazines (each for 20 cartridges) in pouches, which further aggravated the soldier.

As a result, already in 1958, the production of APS pistols was completed, and in 1960-s, most of the army pistols went to warehouses. Although in service with certain categories of Soviet soldiers (in particular, the machine gunners of the PC and the RPG-7 grenade launchers) they were before the beginning of the 1980-s. After the shortened AKS-74U machine gun was officially adopted by the Soviet Army, the active replacement of APS pistols for this model of the machine gun began. By the beginning of the 1990s in the armed forces of the Soviet Union, Stechkin pistols remained only in the units of military intelligence. In addition to the Soviet Army, the Stechkin pistol was in service with the Ministry of Internal Affairs and the KGB of the USSR. 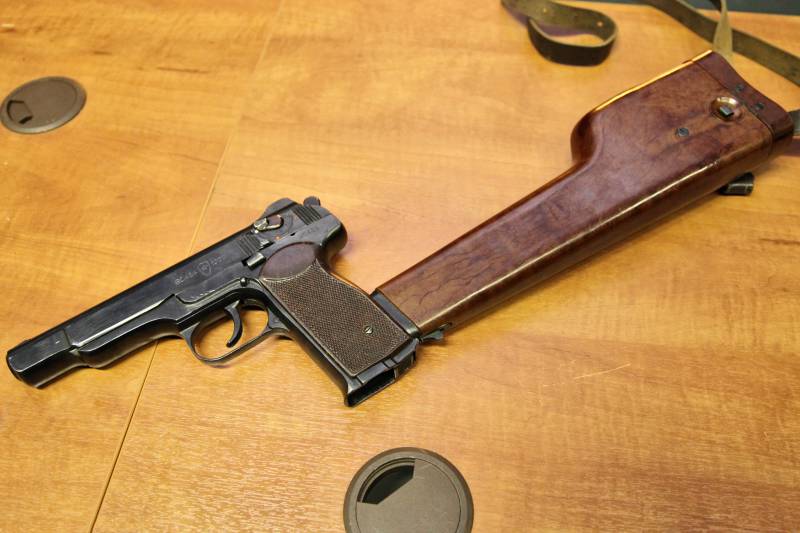