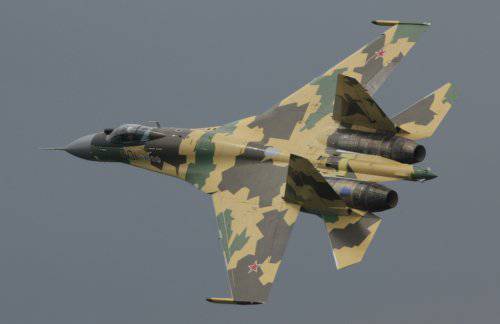 The Sukhoi company is completing preliminary tests of the new Su-35 multi-functional fighter and plans to present the aircraft for state joint tests (GSI) this fall. Su-35, as well as promising aviation Frontline Aviation Complex (PAK FA), will ensure the safety of the sky of Russia in the new century.

As stated by Interfax-AVN program director Su-35, the chief designer of the Sukhoi Design Bureau Igor Demin, "the presentation of the aircraft at the GSI can be expected in September and October." According to him, two Su-35 fighters are currently taking part in flight tests. At the GSE stage, their number will be increased to six. The third car is planned to be lifted into the air in the fourth quarter of this year.

According to Igor Demin, the Su-35 flight test program provides for a fairly large number of flights. This is due to the fact that a lot of new systems and units have been installed on this machine, the most modern aircraft are used.

Earlier it was reported that during the preliminary tests the Su-35 multi-role fighter fully confirms the declared characteristics. In particular, the maximum speed was reached at the ground of 1.400 km / h, at an altitude of 2.500 km / h, the ceiling was 19 thousand meters. The target detection range in the air-to-air mode is over 400 km, which significantly exceeds the similar figure standing on the arms of the aircraft.

Su-35, along with a promising aviation front-line aviation complex (PAK FA), will largely determine the level of Russia's defense capability in the foreseeable future. In accordance with the state contract for the supply of the 2009 Su-2015 to the Ministry of Defense of the Russian Federation in 48, Su-35 at the Sukhoi plant in Komsomolsk-on-Amur launched mass production of fighters, the first of which will be delivered later this year. Serial deliveries will begin in 2011.

The technologies implemented in the Su-35 program will allow in a relatively short time to partially re-equip the Air Force of the country and quickly master the technology of the next generation.
Sukhoi is also negotiating with foreign customers interested in rearming their Air Force. Su-35 serial deliveries for export are planned for 2012 year.

Su-35 - deeply upgraded super-maneuverable multi-generation fighter "4 ++". It uses the technology of the fifth generation, providing superiority over fighters of a similar class.

Distinctive features of the aircraft are a new avionics complex based on a digital information control system, an integrated on-board equipment system, a new radar station with a phased antenna array with a large range of airborne targets with an increased number of simultaneously followed and fired targets. The aircraft has new engines with increased thrust and swivel thrust vectoring.

Su-35 has a wide range of long, medium and short range weapons. It is capable of carrying guided aviation weapons of anti-radar, general-purpose anti-ship, adjustable bombs, and unguided weapons.

Radar visibility fighter compared to the fourth generation aircraft reduced several times due to the electrically conductive coating of the cockpit canopy, the application of radar absorbing coatings and a reduced number of protruding sensors. Aircraft life - 6 thousand flight hours, service life - 30 years of operation, assigned life of the engines with a controlled nozzle - 4 thousand hours.