April 28 2010
3
Russia's long-term naval presence in the Crimea is still not completely guaranteed. 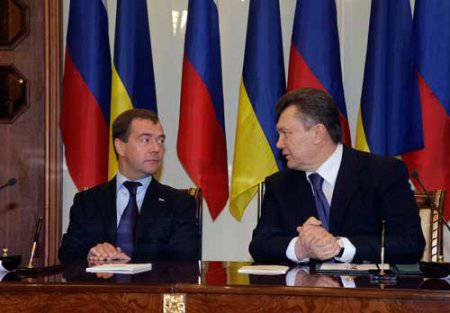 Last week, Russian President Dmitry Medvedev made an unexpected visit to Kharkov, where he signed with the Ukrainian President Viktor Yanukovych a series of crucial decisions for the two countries regarding gas supplies and the presence of Russian Black Sea forces fleet in Crimea. As a result of the agreements reached, the Black Sea Fleet basing period on the peninsula after 2017 has been extended by another quarter century.

In exchange, according to official sources in Moscow and Kiev, Ukraine received significant discounts on Russian gas: 100 dollars at a gas price of 330 dollars for 1 thousand cubic meters or 30% at a price below 330 dollars. This condition will be valid until 2019 year, while it is directly linked to the agreement on the presence of Russian sailors in the Crimea.

Certainly, according to estimates of domestic experts, the prolongation of the treaty, according to which Sevastopol will remain the main base of our Black Sea fleet until 2042, is an important geopolitical victory of the Kremlin. With all the economic costs, Russia on a long-term basis managed to get Ukraine to leave its fleet in the safest and militarily fortified bays of the Black Sea. Mutual military and military-technical integration, active and close economic contacts between the two countries are envisaged.

Of course, the meeting in Kharkov is a significant event, which will be discussed in Russian and Ukrainian textbooks. stories. But are the prospects for the presence of the Russian fleet in the Crimea so uncluttered? How serious will the agreements reached be and what underwater reefs, what icebergs can come across in the future? We will try to answer these and other questions that are closely related to the future of the Black Sea Fleet.

Firstly, such a swift signing of agreements on the Black Sea Fleet for the administration of Viktor Yanukovych and the government of Mykola Azarov is a serious political problem. In fact, the agreement of the current president of Ukraine, only three months after being elected to this post, when the new cabinet ministers had just started to work and the state budget for 2010 had not yet been adopted, quickly resolved gas issues with Russia and at the same time extended the time spent in the Crimea. Ukrainian society. But Yanukovych went for it, confident in his success.

Let me remind you that 11 March, the Verkhovna Rada approved the post of Prime Minister of the Party of Regions, Mykola Azarov. 242 MPs voted for his candidacy, although the minimum required to enlist the support of 226 parliamentarians. Yanukovych expects a similar result when ratifying the agreements on gas problems and the basing of the Russian Black Sea Fleet signed with Russia on April 21.

However, judging by the reaction to the Kharkov agreements between Yanukovich and Medvedev, there was a consolidation of the opposition on the basis of anti-Russian sentiment. Now the BYuT leader Yulia Tymoshenko, the leader of the Front for Changes party Arseniy Yatsenyuk, supporters of Viktor Yushchenko, as well as other pro-Western and nationalist parties and organizations are easier to rally and oppose Yanukovych in a single front in the future elections to the Verkhovna Rada and electing the president five years later.

Secondly, there is the possibility of political forces coming to power, similar to those that the recent President of Ukraine, Viktor Yushchenko, personified. After all, the current head of state, Viktor Yanukovych, is extremely unpopular in a number of regions of the country, especially in the west. Of course, Russian gas and other economic preferences, hopefully, will play a role. Of course, Moscow will help the Party of Regions in every possible way, and other supporters of further rapprochement with the Russian Federation. But there are many objective factors that can hinder this process: the ongoing global economic crisis, pressure from the United States, the European Union and NATO (although judging by official statements, Medvedev-Yanukovych took the results of the summit rather calmly). Will Yanukovych and his associates, together with the Russian leadership, be able to effectively counter this? This is not only an idle question - fateful for Moscow, and for Kiev, and for our Black Sea Fleet ... and for Viktor Yanukovich.

Third, the ideological and ideological stratification is a reality of Ukraine. It must be perceived and taken into account in the forecasts. Apparently, realizing this, Yanukovych eventually wants to hold a referendum on the presence of the Black Sea Fleet in the Crimea, so that on the basis of political statistics, the answers of all the people prove to him the correctness and necessity of the decisions made. On the possibility of organizing such a general survey of fellow citizens, the Ukrainian president said a day after the talks with his Russian counterpart. But the question is: how will the results of the referendum be related to the fact that the agreements on the Black Sea Fleet have already been signed and most likely will be ratified by the Verkhovna Rada?

Thus, the possible unstable political future of Ukraine can directly affect the fate of the Black Sea Fleet. We have already witnessed this recently, when, under Yushchenko, the Ukrainian authorities forbade our ships to go out to sea from the bays of Sevastopol, did not give the opportunity to replenish the fleet with new ships to replace old and retired combat units when they sent FSB security officers and so on. It was during the presidency of Viktor Yushchenko that the Ukrainian Foreign Ministry developed a memorandum “On the stages and procedure for the withdrawal of military units of the Black Sea Fleet of the Russian Federation from its temporary dislocation sites by May 28 and on the territory of Ukraine "Kiev and Moscow offered to sign it. The Russian side refused to do this and stated that it intended to discuss the withdrawal of the Black Sea Fleet no earlier than 2017.

Today, the opposition in Ukraine declares that the team of Yanukovych betrayed the national interests of the country, violated the Ukrainian constitution, which prohibits the deployment of foreign military bases in the territory of the “independent power”. In general, in Kiev, and in other cities and towns of Ukraine, violent political battles unfold with a far from clear outcome.