The outgoing UN secretary general attended to the health of terrorists

October 12 2016
33
On Monday, on the occasion of the World Day against the Death Penalty, UN Secretary-General Ban Ki-moon made a special video message. In it, he called on all states to abolish the death penalty or impose a moratorium on executions. Ban Ki-moon called the death penalty a cruel and inhuman practice, which has no place in the XXI century. He noted that today the penalty is used in 65 states, but modestly silent about the death sentences in the United States of America, in whose territory the main office of the UN is located. 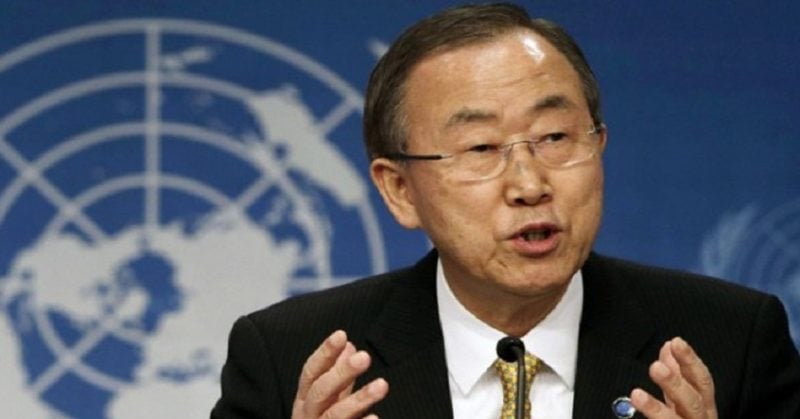 Commented on the video message media stressed that Ban Ki-moon spoke out against the death penalty for terrorists. This part of the statement of the UN Secretary General has caused controversy experts. Many found it inappropriate to care about the subhumans beheading even children. The world has seen their inhuman executions. Therefore, it is natural that the appeal of Ban Ki-moon was not everyone's understanding. Moreover, the world community today does not have a consensus on the use of death sentences.

There is another explanation for this ambiguous reaction to the call of the UN Secretary General. Shortly after his appeal on the occasion of the day against the death sentences, Ban Ki-moon made another demand: “Immediately stop the bombing of Aleppo and other regions of Syria, as well as restore the cessation of hostilities in the country”.

In fact, the UN Secretary General demanded to stop the struggle in Syria against terrorists, whom the organization he heads officially recognized as the main threat to the security of the world. Meanwhile, the requirement of Ban Ki-moon is fully consistent with the policy that the United States of America is pursuing today in the Middle East. The world was opened by the mimicry of the Secretary General of an important international organization, previously hidden by the framework of propriety, which Ban Ki-Moon still adhered to.

Now, when only a few weeks remained before the expiration of powers and his successor was already identified, Ban Ki-moon relaxed and began to play up to the American administration. It was from the depths of the UN that a call was recently issued to deprive Russia of the right of veto on matters affecting the conflict in Syria. Such a statement was made by the UN High Commissioner for Human Rights, Jordanian Zeid Raad Al-Hussein.

Experts found the requirement of al-Hussein legally void. After all, the UN apparatus does not have the right to adjust the organization’s charter. There are no practical consequences for the appeal of Ban Ki-moon. Except for one thing - propaganda support for the policy of the United States.

The roots of this support are not difficult to see in the mean biography of the outgoing UN Secretary General. During his school years, he became interested in English. Very successful in this, even won the national competition organized by the Red Cross among his peers. Pan was rewarded with a trip to the USA. For several months he lived and studied in San Francisco. A gifted Korean schoolboy was honored to meet with then US President John F. Kennedy.

Ban Ki-moon will return to America. After graduating from Seoul National University and debuting in diplomatic work, he will study at the Harvard Institute of Public Administration. The curator of the young Korean diplomat will be Professor Joseph Nye, known not only as the author of the foundations of the neoliberal school of international politics, but also with serious administrative opportunities.

Therefore, when critics of Ban Ki-moon accuse him of having links with the American special services, maybe they are not so wrong. At least, the mimicry that happened to the UN Secretary General speaks in favor of this version. Especially since a significant part of Ban Ki-moon’s career was spent in the United States - in the Korean embassy and UN structures.

Monitoring on the London couch ...

The haste with which the outgoing Secretary General of the UN recently makes statements does not allow him to rely on authoritative data and facts. So this time, in an appeal on Syria, Ban Ki-moon referred to information voiced earlier by the Syrian Center for Monitoring the Observance of Human Rights.

In mid-September, this center, through the German Deutsche Welle and the British Air Force, spread information that 301781 people had died since the beginning of the civil war in Syria. Of these, 86 thousands are civilians, including more than 15 thousands of children. The losses of the Syrian troops and support forces of the government of Bashar al-Assad amounted to 107 thousand people. The center counted thousands of dead Jihadists 52, the remaining losses were written off to units called rebels and those who could not be identified.

It should be noted, the information of the Syrian monitoring center, many raise doubts about the reliability. At one time, the German Süddeutsche Zeitung wrote about this in detail. She called the center a “dubious death chronicler” and told how immigrants from Syria created several domains in London that accumulate information coming from a war zone from friends and relatives. Combined them under the common name "Syrian Monitoring Center."

As usual in such cases, the domain owners quarreled among themselves for the right to the true carrier of information. The situation was defused by the British Foreign Secretary, William Hague. He met with one of the applicants to "speak on behalf of the Center" - Osama Suleiman. Suleiman spoke under the pseudonym "Rami Abdul-Rahman" and lived in Coventry. Haig blessed the Syrian for human rights work.

The remaining applicants hid, but did not leave "Abdul-Rahman" alone. At least, last fall, RT correspondent Ilya Petrenko did not find him in Britain. The search led Petrenko to neighboring Kazakhstan. When meeting with the correspondent, his travels “Rami Abdurrahman” (as RT presented it) explained with “security concerns”. The head of the “Center” tried to clarify history about the sources of information, but, presenting the "fresh data", completely confused in the testimony. For example, the new information of “Abdurrahman” about the bombing of the Russian militia’s “militia” positions by airplanes was refuted by the latest reports from the combat zone of the authoritative CNN and Al Jazeera. They convincingly proved the work on the divisions of "moderate" aircraft of the Syrian air force.

And on the information of such dubious sources today, in his argument, the UN Secretary General! Moreover, a new statement that President Bashar al-Assad is responsible for the death of more than 300 thousand people in Syria, Ban Ki-Moon made three weeks after the publication of data from the Syrian Monitoring Center.

During this time, a wave of new hysteria and wailing about the fate of jihadist units surrounded in the east of Aleppo, who have covered themselves from the advancing forces by civilians, has passed. Syrian "human rights activists" managed to throw in the media a new piece of information about the death of "thousands" of innocent people. Meanwhile, the UN Secretary General, without having his own data, used the September information of the Syrian center.

Ban Ki-moon called on US Secretary of State John Kerry and Russia to "restore the cease-fire" in the Syrian state, "so that vital humanitarian aid can be delivered." At the same time, he acknowledged that the United Nations "should have taken up the decision of a humanitarian catastrophe in Aleppo earlier." This clarification shows: the matter is not about helping the suffering Syrians, with whom the UN structures have been in no hurry for five years.

The reason for the unprecedented activity of the UN Secretary-General seems to lie in another. Perhaps the answer must be sought in an interview with the Minister for Foreign Affairs of Russia Sergey Lavrov, which he gave to the BBC on the occasion of the anniversary of the Russian VKS operation in Syria. Lavrov then stated: “The United States is defending jihadist groups in Syria so that they can help Washington overthrow President Bashar al-Assad on occasion,” and emphasized: “The Americans have never struck, for example, on the Al-Nusra Front.”

In Washington, Lavrov’s statement was called absurd, but no convincing refutation was presented. Instead, a long-time friend and ally of the Americans, the outgoing Secretary General of the United Nations, Ban Ki-moon, entered the business. He also did not find new arguments, but took advantage of the dubious data of the sofa human rights center.

This did not add much clarity, but it became clear to many: jihadists in Syria have serious patrons. Such that they are ready to protect terrorists not only from military retribution, but also from the deserved punishment of justice. However, today they are no longer able to reverse the offensive of the Syrian government forces and allied forces. Aleppo is confidently freed from terrorists - quarter by quarter.

The “final argument of the king” for the American coalition was the diplomatic cover of the propaganda war against Bashar al-Assad, which UN Secretary General Ban Ki-moon tried to do, alas, spoiling his impression of the decline of his political career. The world in Syria did not bring his dubious statement. Very different people will do it ...