October 11 2016
79
Roscosmos intends to conclude a contract with the only supplier represented by SP Rocket and Space Corporation Energia Korolev "to create a manned transport ship of the new generation (in the framework of the Federal Space Program of the Russian Federation on 2016-2025) with the alleged name" Federation "(Code number SCR ROC:" PPTK "), reports bmpd with reference to the procurement portal. 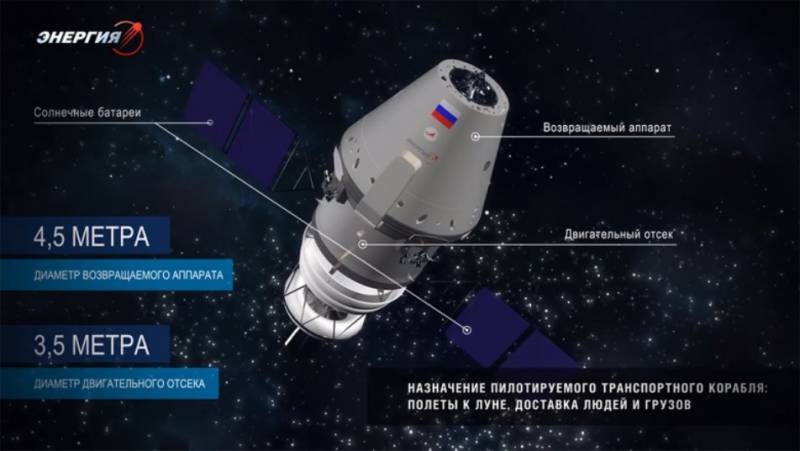 The contract price is 57,5 billion rubles, the estimated completion of works is 30 November 2025.

2.1.3 Carry out an analysis of the flight test program and correct the documentation (if necessary).

- launches of manned transport ships to near-earth and near-moon orbits;

- crew rescue in emergency situations at the launch complex, on the active part of the ILV flight, at the stage of descent in the atmosphere and landing;

- training of personnel for the performance of work with flight products and ground-based technological equipment, including the preparation of KGCH launches.

3.1.4 The space head must be unified for flights to near-moon and to near-earth orbits.

3.2.1 PTK is designed to deliver the crew and payload to the near-moon or near-earth orbits and their subsequent return to Earth.

3.2.2 During a flight, a manned transport ship must provide:

- rapprochement and docking on a near-moon (near-earth) orbit with elements of the orbital lunar (near-earth) infrastructure;

- functioning as part of the near-earth orbital or near-moon orbital infrastructure;

- flight along the circumlunar / near-earth orbit in manned and unmanned modes;

- transition from the circumlunar orbit to the flight trajectory to the Earth;

- submersion of DOs in a given area of ​​the World Ocean;

- BA descent, VA regular landing. ensuring the safety of crew health, landing accuracy, and the suitability of the aircraft for future use.


3.2.3 When performing flights to the Moon, the following ratio of crew size, duration of an autonomous PTC flight and payload mass should be met:

- the mass of the delivered / returned cargo is not less than 100 kg;

- the duration of the autonomous flight to the Moon, the flight through the OISL and return to Earth - at least 30 days;


3.2.4 When performing flights in near-earth orbit, the following ratio of the number of crew, the duration of an autonomous PTC flight and the mass of the payload must be met:

- crew full-time - 4 person (must be provided with the possibility of placing for the descent no more than 6 people);

- the duration of the autonomous flight of the PTK in near-earth orbit:

2) when performing target flights with an 4 human crew - at least 14 days;

3) when performing target flights with a crew of at least 2 people — at least 30 days;


3.2.5 The multiplicity of the use of the returned apparatus when performing near-Earth flights and flights to the Moon - 10.

3.2.6 PTK should provide automatic and manual performance of the following operations when interacting with elements of the near-moon (near-earth) orbital infrastructure:

- rapprochement and docking with ELOI (EZOI);

- building and maintaining the orientation of the PTK in a near-moon (near-earth) orbit during autonomous flight;

- the issuance of the pulse of departure from the moon to return to Earth.

3.2.9 PTK should provide landing in specified areas on the territory of the Russian Federation on land within a radius of no more than 5 km. ”

Works should be performed using the scientific and technical background created by RSC Energia under the state contract No. 19.12.2013-351 / 9990 / 13 from the 427 state contract for the design and development work of the PPTS (1 stage).

“1.Development of working design documentation for AU and MF AUU (PTK, RBAS, NWB), including the program and methods of metrological expertise. Metrological examination - the term 09.2018

2. Manufacturing of mock-ups and experimental products, autonomous tests and corrections of the working documentation of the PTK, SZB and RBAS. Metrological examination - the term 09.2023

3. Production of mock-ups and experimental products, complex and interdepartmental tests, adjustment of the working documentation of the hardware and software complex, the sanitary protection system and the RBAC. Metrological examination - the term 02.2025

4. Production and preparation of the flight model PTK, flight tests, including support of the flight PTK in an unmanned version in 2021 year - the term 03.2022

8. Manned space complex in support of the lunar program with a heavy-class PH - 09.2021 term