30 September 2016
13
Each shooter knows that to achieve accurate pistol shooting is a rather difficult task, which requires not only maximum concentration, but also skills developed to automaticity. At the same time, firing a pistol outside a shooting range or shooting range, but in real conditions of self-defense or combat becomes even more difficult due to physical fatigue, stress and many other factors. At the same time, many are well aware that, all other things being equal, to hit the target from weaponsEquipped with a butt is easier than with a regular pistol, even if both samples of the weapon will have the same barrel length and use the same cartridges. All this stems from the basic properties of human physiology and anatomy. Therefore, gunsmiths eventually came up with the idea of ​​trying to equip a pistol with a butt.


Even during the domination of muzzle-loading firearms (XVII-XVIII centuries), single-shot pistols could be equipped with a detachable butt, similar devices appeared later for the capsule revolvers of the mid-XIX century, mainly for large-sized military models. Such a solution allowed, under normal conditions, to use a revolver or a pistol for shooting from hands at short distances, and, if necessary, attach a butt to a weapon and shoot aimed at more distant targets. In the USA, detachable butts were awarded to some models of Colt revolvers. Such weapons include, for example, the Colt Dragoon revolver model 1848 of the year.

The Mexican-American War 1846-1848 brought the American gunsmith Samuel Colt an order to create a revolver Colt Walker. But this revolver, quite successful at that time, was also distinguished by a number of constructive problems. First, during the shooting, the lever for the equipment of bullets sometimes fell down, blocking the drum of the revolver with its rod. Secondly, the drum sometimes just could not withstand the load and burst. In addition to all of the above, this model of the revolver turned out quite heavy and massive for a short-barreled weapon. Therefore, to replace him in 1848, Samuel Colt created a new revolver, who called the Colt Dragoon (Colt Dragoon). 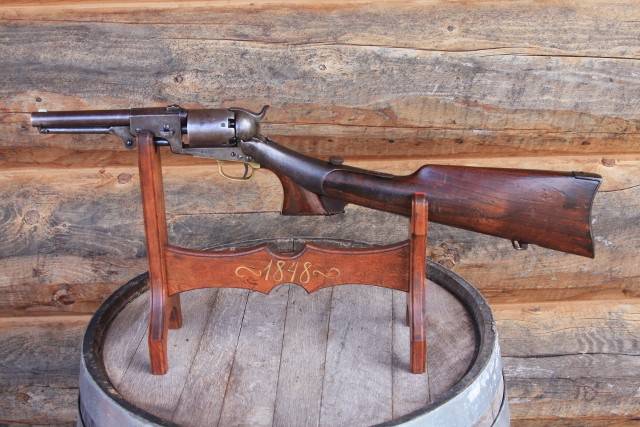 In the new model, the Colt eliminated all the shortcomings in the previous revolver: a sufficiently large weight, possible distortions of bullets when filing a drum in the chamber, which caused the latter to break when firing, as well as a number of others. From the name of the revolver it was already clear that this model was primarily intended for arming cavalry units, it was designed specifically for mounted shooters - dragoons. The revolver Colt Dragoon was mass-produced from 1848 to 1861 year in six main varieties. The model was very popular in America in the 1850-ies, and was also very widely used during the American Civil War.

Since we are interested история the so-called pistol-carbines, then consider the model of the Colt Dragoon №3-bis. It was this model of the Colt revolver that was completed with a detachable butt, which had a special groove into which the handle of the revolver itself was inserted. Thanks to such a butt, as well as an additional pistol from a revolver installed in the upper part of the barrel, it was possible to conduct more accurate shooting, especially at large distances for such weapons. It is worth noting that this version of the Colt Dragoon revolver was released in a relatively small series, just about 950 such revolvers were produced in the USA. Detachable butt was fixed on the revolver with two screws. When assembled, such a revolver was a kind of real carbine.

It should not be forgotten that the first revolvers, which, thanks to Colt, became unthinkably popular, were not technologically perfect. All of them were capsular, that is, with all their quick firing, reloading such revolvers still took a lot of time: it was necessary to fill the powder and place the bullet separately, and not with a single cartridge, as is happening now. The revolvers with the unitary cartridges familiar to all of us were not invented right away, but the cowboys of America and the military of that time appreciated the ability to fire 5-6 at their opponents almost instantly. And the presence of the detachable butt on the Colt Dragoon revolver made it possible to make these shots even more accurate. 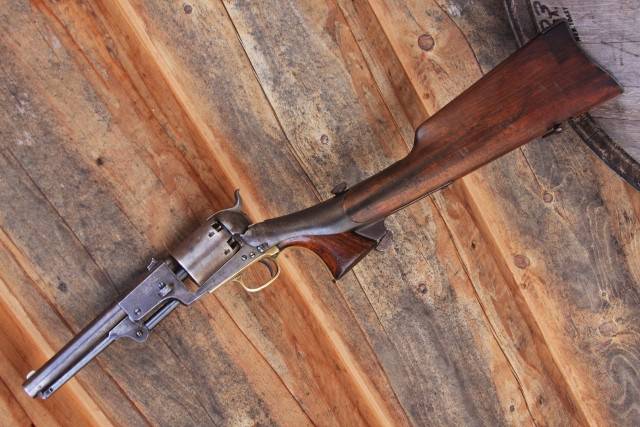 It was the butt that became the main feature of the revolver, which practically turned it into a small carbine. The detachable butt was attached directly to the handle of the revolver, which differed from the usual presence of a transverse recess located in the lower rear part. The butt could be rigidly fixed on the handle of the Colt Dragoon revolver due to the screw, the head of which differed in a sufficiently large size and had a knurling for more convenient unscrewing or twisting. The screw as though attracts "heel" with a ledge. From the front, the two side protrusions of the butt rest against the reciprocal recesses located on the lower part of the shield of the drum. The assembly and disassembly of the butt was not as fast in time as, for example, in more modern systems (for example, the Mauser C96 pistol), however, for 1848, this design was considered successful. The butt plate was made in the form of an L-shaped steel plate. Such a back plate later will become very popular. Until now, it can be found on replicas of Winchester carbines with reloading Henry brace.

In addition to the possibility of installing a butt revolver Colt Dragoon had other features that were inherent in the carbines. In particular, located near the breech of the breech, the rear sight had three shields for firing at different distances, while the middle rear sight was fixed. The rear sight was foldable and had a higher shield for firing long distances. The hinged rear sight was even higher. Most likely, the fixed central rear sight was intended for firing at a distance of 50 yards, the rear one - at 100 yards, and the front one - 150 yards. If firing at a greater distance, a Colt Dragoon blasting gun with a barrel length of 7,5 inches, equipped with black powder, would hardly be effective. Despite the presence of the rear pillar with folding flaps, the weapon had a Colt slot, traditional for all Colt revolvers, located on the top of the anvil of the trigger. Being in the cocked position, the trigger could also perform the function of the sight of a revolver. However, to use this slot on the trigger as a whole, in the case of the Colt Dragoon revolver, it would hardly have happened - the fly blocked any of the three pillars.

The rest of the revolver Colt Dragoon was by design completely identical to the Colt revolvers of that time period. The characteristic features of all the Colt caps revolvers of those years were a frame not closed at the top, as well as a detachable (on the latch) barrel with a massive tide, which was also the front part of the frame. Under the barrel of the revolver on the hinge was located a rod with a lever that was folded down, which was designed to ignite the powder charge, as well as to send a bullet into the front of the drum. The barrel of a revolver with a massive tide was connected to the back of the frame using a large-diameter drum axis. The axis was so massive and strong that the absence of the upper lintel of the frame of the revolver could not significantly affect the mechanical strength of the weapon. The frame of serial revolvers of the Colt design became integral only from the beginning of the 1870-s, when the design of the revolvers themselves underwent some changes due to the use of new unitary ammunition. 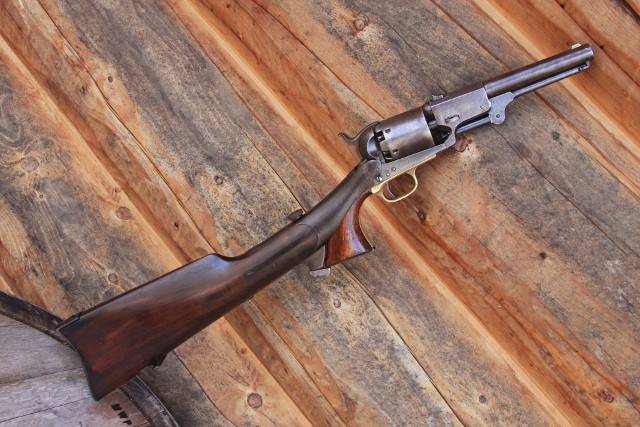 Caliber revolver - .44 Magnum, it was a revolving ammunition of high power, the approximate diameter of the bullet was 10,9 mm. On the Colt Dragoon revolver, a single-action trigger mechanism was used, as well as a six-chamber drum. The loading of the drum was carried out from the muzzle side of the chamber. A conical bullet was sent to the drum with a lever located under the barrel of a revolver. On its right side in the breech there was a cutout designed for the convenience of fitting the drum with caps. Gunpowder ignited primer with rattlesnake mercury. The distinction and feature of the Colt Dragoon revolver was the presence of a latch lever to load the drum. This latch was under the barrel of the weapon and fixed the front part of the lever, not allowing it to involuntarily drop from the vibration that occurred during the firing of a revolver. In this case, the drum on this model has become shorter than on the Colt Walker, as well as more durable. This was achieved by increasing the thickness of the walls of the chamber. The length of the barrel of the Dragoon revolver has been reduced from 9 inches to 7,5 inches compared to the previous Walker model.

The only detail that did not quite match the “typical” blasting revolvers of the Colt design of that time period was the round barrel. Most often the trunk with the tide was one detail. The barrel had a circular section that was not characteristic of 19th century models, which first appeared a year earlier on the Colt Walker revolver model. 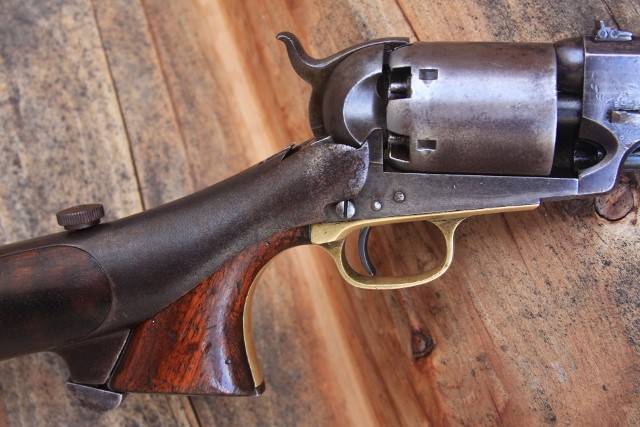 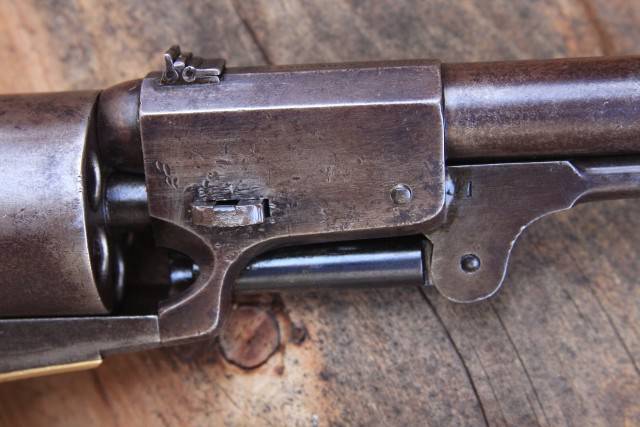 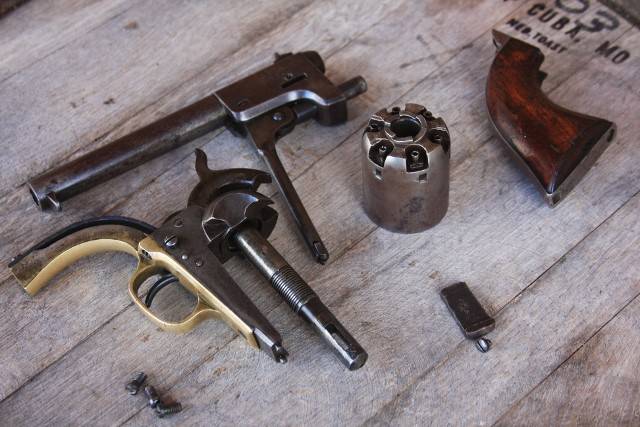 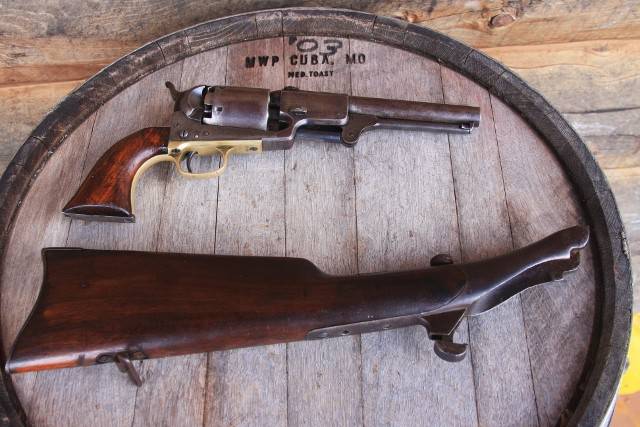 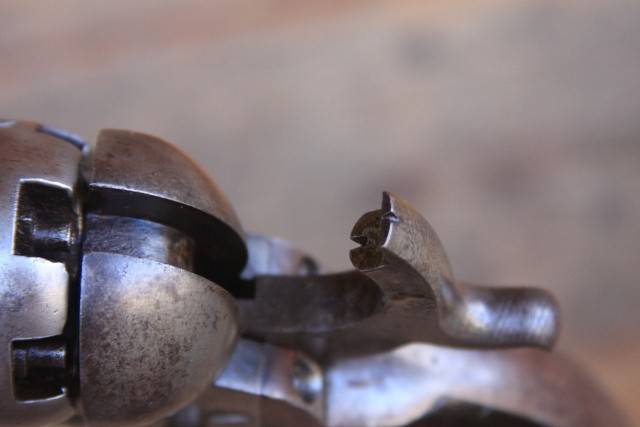 Ctrl Enter
Noticed a mistake Highlight text and press. Ctrl + Enter
We are
Revolvers of the Wild West
13 comments
Information
Dear reader, to leave comments on the publication, you must to register.