26 September 2016
51
In early September 2016, the founder of the Internet company Amazon, Jeff Bezos, made a statement about the beginning of work on a heavy-class space rocket. The rocket was named New Glenn. Its development will be engaged in the company Bezos Blue Origin, the size of the new booster must surpass all modern missiles. It is worth noting that Jeff Bezos, the founder and head of the Internet company Amazon, in the list of the richest people in the world, compiled by Forbes magazine, ranks fourth. His fortune is estimated at 66,2 billion dollars, from which it can already be concluded that his ambitious project will be supported at least from the financial side.


Blue Origin is an American private aerospace company located 40 kilometers north of the city of Van Horn, in Calberson, Texas. The company was created in 2000 year for the development of a new direction - space tourism. Its founder was the owner and creator of Amazon.com, Jeffrey Bezos. The company is located on the territory of his ranch. The plans to create a new, more powerful reusable rocket called the New Glenn began to talk back in September last year. It is planned to launch it from the launch complex No. XXUMX of the US Air Force located on Cape Canaveral. As of September 36, the Blue Origin aerospace company is building a launch pad and hangars on the territory of the Air Force base.

The privately owned American company Blue Origin is involved in designing and manufacturing rockets for the space tourism industry. Today, the company's engineers have only one successful project - a suborbital rocket called the New Shepard. This is a reusable rocket, it is designed to fly slightly above the Karman line (the Karman line is the height above sea level, which is conventionally accepted as the boundary between the earth's atmosphere and space), that is, at an altitude of about 100 kilometers above sea level. First in stories The New Shepard suborbital missile successfully landed in November 2015. Later, Blue Origin designers conducted repeated rocket tests, including in emergency mode. The New Shepard rocket is a rather “modest” project: the crew capsule, which forms its second module, is designed to accommodate three people. 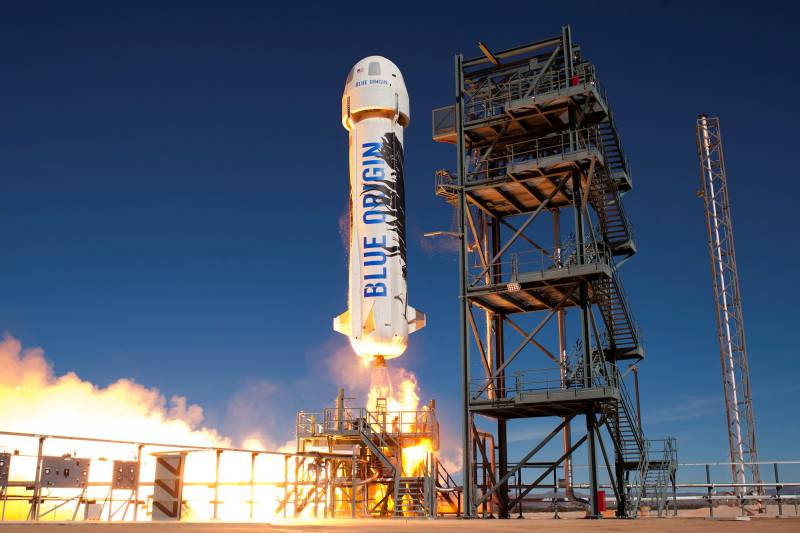 Although the modest tourist suborbital rocket New Shepard and the only successful space project implemented by Blue Origin, it was she who was the first in the world to demonstrate the possibility of a controlled landing on jet propulsion to the take-off site, according to The Washington Post. In October, 2016, the fifth and final test of the prototype of this suborbital rocket is scheduled - to work out the salvation of its crew members. In January, Blue Origin re-implemented the successful vertical landing of the first stage of the reusable New Shepard rocket, after it reached the altitude 2016 kilometer in flight. According to the founder of Blue Origin, the launches of the New Shepard suborbital complex with the participation of test pilots are scheduled to begin in 101,7. If these tests are successful, then in 2017, the company plans to move to sending the first tourists into space, the businessman said. Until recently, Jeff Bezos did not specify the starting date for commercial flights using New Shepard.

In September, the newspaper The Washington Post, which is owned by D. Bezos, published a comparative sketch of the new Glenn rocket. From the published images, it can be concluded that it is only slightly shorter than the Saturn V launch vehicle (carrier of the American lunar program), and it surpasses all modern missiles in diameter of the first stage (7 meters). The purpose of the creation of the rocket declared manned space program and delivery of goods into orbit, the period of testing the new heavy rocket marked the "end of the current decade." “Our main goal is millions of people working and living in space, and the New Glenn rocket is an important step in this direction,” Bezos said.

The new heavy rocket carrier called New Glenn, on which Blue Origin engineers are working, possibly already 4 of the year, was named after John Glenn, the first American to make an orbital flight around the Earth. The diameter of the first stage of the New Glenn rocket is 7 meters, while it is equipped with X-NUMX engines BE-7, which run on liquid oxygen and liquefied natural gas. Rocket lift thrust reaches 4 million pounds of thrust (thrust thrust is the amount of thrust that is needed to keep an 3,85-pound object (1 kg) stationary relative to Earth’s gravity). 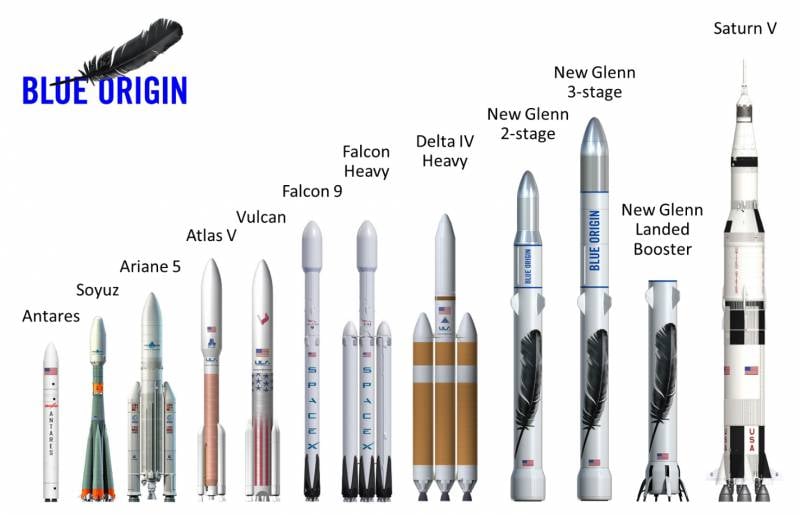 The rocket New Glenn will be presented in two configurations - with two and three stages, respectively. The height of the rocket in a two-stage version will be 82,2 meters. Its main purpose is to deliver a variety of cargo to near-earth orbits. The height of the three-stage version of the rocket is 95,4 meters, which is only slightly inferior to the carrier rocket Saturn-5, which was used to carry out the first man’s landing on the lunar surface. The three-stage version of the New Glenn rocket is designed for "important missions outside of near-earth orbits." In the second stage of the New Glenn launch vehicle, one more BE-4 engine will be additionally installed. And the third stage of the rocket will be equipped with a BE-3 engine, which operates on liquid oxygen and liquid hydrogen, it is noted that hydrogen will give the rocket a high specific impulse, which is important for its use outside the Earth's orbit.

In the first stage of the rocket, as already noted above, must be located 7 BE-4 engines developed by Blue Origin on cryogenic components (methane - oxygen). They are in the aerospace company called the best alternative to the Soviet rocket engines RD-180 (they are currently equipped with the American heavy Atlas V rocket). The BE-4 engines have not yet passed a series of flight tests, but Blue Origin engineers believe that with these rocket engines their New Glenn will immediately surpass the Atlas V rocket on the first stage at the ground (near 10 ton) by 1700. This is only two times less than the Saturn V rocket that brought American astronauts to the moon.

Currently, the main competitor of Blue Origin in the field of creating reusable rockets is considered to be another private American company, SpaceX, owned by Ilon Mask. Recently, her Falcon 9 rocket with an Israeli communications satellite, AMOS-6, exploded on board during tests at the launch site SLC-40 located on Cape Canaveral. The official Twitter of SpaceX said that the rocket explosion occurred due to an “anomaly” during a standard test burn. Falcon 9 was not injured during the explosion, but the rocket and cargo were completely destroyed as a result of the explosion. 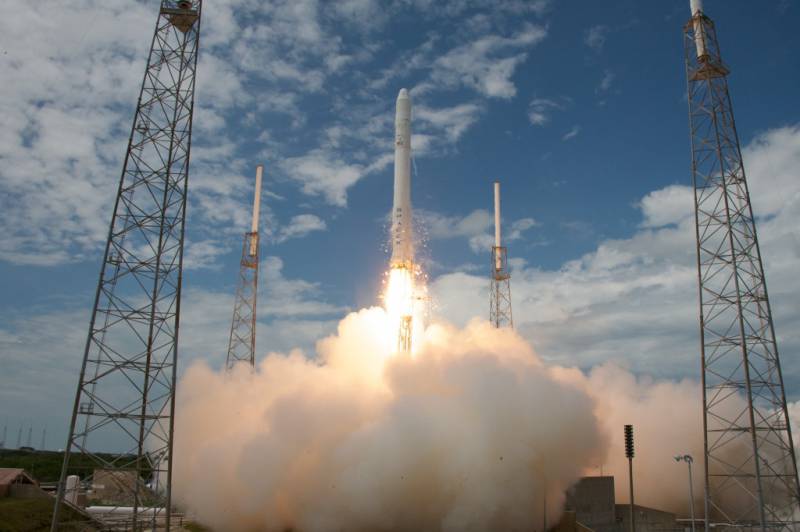 American billionaire Ilon Musk founded SpaceX as early as 2002. SpaceX engineers are engaged in the production of Falcon missiles. Previously, they successfully designed and launched into the space rocket Falcon 1, belonging to the light class, and the launch vehicle Falcon 9, belonging to the middle class. On account of the latter, there is already a successful flight to the ISS board, and also SpaceX has managed to land the first stage of this rocket on the ground, as well as on an offshore platform. SpaceX engineers are currently working on creating a heavy-class launch vehicle that will be able to launch cargoes up to 54,4 tons into near-earth orbit or deliver various tons of 13,6 cargoes to Mars.

Ctrl Enter
Noticed oshЫbku Highlight text and press. Ctrl + Enter
We are
Blue Origin missile crashed
51 comment
Information
Dear reader, to leave comments on the publication, you must to register.