23 September 2016
73
The 152-mm howitzer "Msta-B" (GRAU index - 2А65) can be considered the last in a long series of post-war field howitzers of Soviet development. At the same time, much less is known about it than about the 152-mm self-propelled howitzer 2C19 “Msta-S”, it can be said that the towed variant is in the shadow of the self-propelled unit. At the same time, the 2X19 "Msta-S" (put into service in 1989) and the towed howitzer 2A65 "Msta-B" (put into service in 1986) were the most modern guns of the field artillery of the Soviet Army, and now the Russian one.


Both artillery systems are still in service and actively exploited. The artillery units of both systems (2А64 and 2А65, respectively) have the same design, the only difference is that the 2А64 has an ejector to remove powder gases from the barrel after the shot. Serial production of the towed version began in the 1987 year. Currently, the 152-mm howitzer Msta-B is in service with the Russian army, as well as several countries of the former Soviet Union - Belarus, Kazakhstan, Georgia and Ukraine. Howitzers managed to make war during the second Chechen war, as well as the armed conflict in the east of Ukraine on the territory of Donbass. Also, artillery systems are used in Iraq, were purchased from Russia by the government of the country to fight ISIS and in Syria.

In the middle of the 1970s in the Soviet Union, almost simultaneously with NATO, they realized the need for a radical modernization of artillery systems and a transition to a single caliber in the army and divisional element of the ground forces. In the future, the 120, 130, 152, 180 and 203 mm caliber guns should have been replaced by a single 152 mm caliber artillery system of separately-cartridge loading, developed in towed and self-propelled versions, with a unified set of used ammunition. Such an artillery system was to be the new howitzer Msta, which was developed from 1976, under the leadership of chief designer G. I. Sergeev. Work on the creation of a new artillery system was carried out at the Barrikade Design Bureau (today TsKB Titan) in the city of Volgograd.

According to the terms of reference received from the military, the Msta howitzer was intended to destroy tactical nuclear weapons, mortar, artillery and missile batteries delivery vehicles, destroy field fortifications and other defensive structures, command and control posts, air defense and missile defense systems, tanks and other armored targets, manpower and fire weapons of the enemy. The firing range was to impede the maneuvers of enemy reserves located in the depths of his defense. The howitzer was supposed to fire at both observable and unobservable targets from closed positions and direct fire, including operation in mountainous conditions. Despite the fact that the main goal of creating a new artillery system was superiority over foreign competitors, both existing and only being developed, the requirement was again left to use with the artillery system the old full-time shots of towed howitzers D-20, ML-20, 2C3 self-propelled guns and 2C5, with variable charges in both steel and brass sleeves.

The R & D complex on the creation of a new towed howitzer Msta-B began in 1976 year. The main purpose of the development of the artillery system was: increasing the range of fire, increasing the angle of vertical guidance, increasing the effective action of the projectile at the target, maneuverability and other characteristics in comparison with the D-1, ML-20 and D-20 howitzers that were in service with the Soviet Army .

The main attention in the development of the new howitzer was paid to the problem of ensuring high accuracy of shooting with the help of constructive measures. The layout of the main nodes 152-mm howitzers Msta-B was implemented in view of ensuring the stability of disturbing moments arising from shooting. At the design and tooling stage of the instrument, the designers carried out a study on choosing the optimal combination of the structural and geometric parameters of the projectile, which ultimately allowed for improved aerodynamic characteristics of the high-explosive fragmentation projectile, as well as its stability on the trajectory, despite the significant length and long-range projectile . 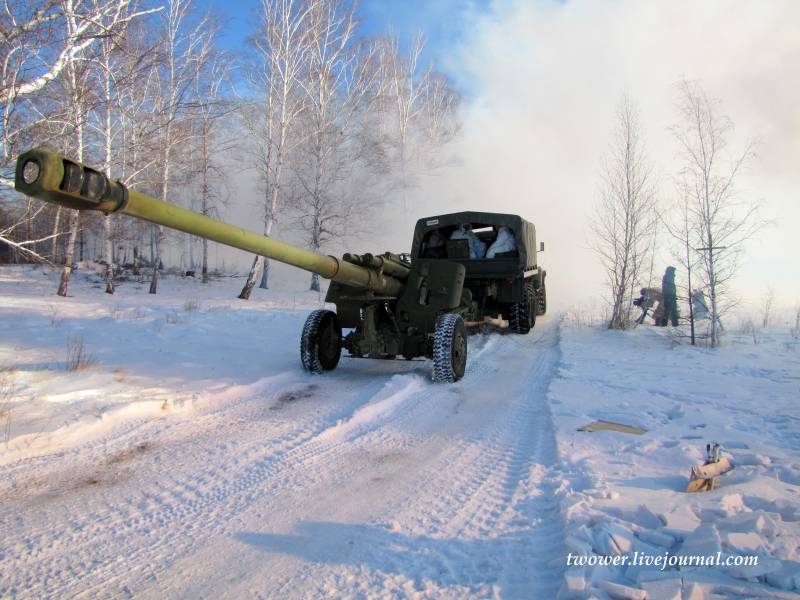 Howitzer "MSTA-B" was equipped with a semi-automatic breech and rammer spring type designed for chambering a shell and liner, hydraulic jack with a pallet for shooting with put wheels, hydraulic recoil device with a liquid-cooled recoil buffer, two-speed screw mechanism of the horizontal guidance and a two-speed mechanism sector-type vertical guidance, sighting device intended for firing from closed positions and direct fire, pneumatic system of braking wheels, beds with folding bipod and under-hood rollers.

Work on the creation of a howitzer ended successfully, in 1986, the new artillery system was adopted by the Army of the USSR Armed Forces, the mass production of towed howitzers began in 1987. The howitzer was manufactured by Perm Machine-Building Plant (today Motovilikha Plants). In total, in Perm about 1200 such howitzers were assembled. For the development of 152-mm towed howitzer Msta-B, a large group of design engineers at the Barricades design bureau was awarded various government awards, and the design work of the artillery system and shots to it was awarded the USSR State Prize.

The following design solutions were successfully implemented in the MNTA-B 152 mm howitzer:
- three-chamber muzzle brake, which had an efficiency up to 63%;
- loading mechanism with throwing spring shearer, cocked from the sliding parts, and the guide tray with the drive from the shutter;
- two-speed gun pointing mechanisms that provided vertical guidance angles up to 70 degrees and horizontal guidance on slopes up to 5 degrees;
- automatic shutdown of the suspension of the wheels when breeding the bed.

The towed 152-mm howitzer Msta-B (2А65) was built according to the classical scheme for artillery guns. The howitzer received a barrel-monoblock equipped with a three-chamber cast muzzle brake and a semi-automatic vertical wedge gate, the barrel length - 53 caliber. Above the barrel were hydropneumatic recoil devices (knurler and recoil brake with liquid cooling). To protect the calculation (consisted of 8 people) and howitzer mechanisms from small fragments and bullets, the howitzer had a top machine with shield shield. There were also swiveling (two-speed, screw), lifting (two-speed, sector type) and balancing mechanisms.

The lower howitzer machine received two box-section beds and a two-wheeled chassis. A special pallet was installed on the lower machine of the howitzer gun carriage, on which the gun was lowered with the help of a hydraulic jack when transferring the artillery system from the marching to the combat position. Auxiliary metal rollers were placed at the ends of box beds with which the howitzer could be turned to fire in any desired position (without changing the position of the howitzer beds, the angle was 55 degrees). In the vertical plane, the existing lifting mechanism of the upper machine provides guidance of 152-mm howitzer Msta-B to the target in the range of angles from −3,5 to + 70 degrees. To reduce the fatigue of howitzer calculation numbers and increase the rate of fire, it was equipped with two throw-type spring-loaded rammers for sending charges and projectiles.

When translating the howitzers to the stowed position, the pallet rises and fastens to the trunk and the cradle, and the beds are shifted and then connected to the trailer hitch. The Ural-4320 army off-road utility vehicle with the 6x6 wheel formula serves as a regular means of transporting an artillery system. The sprung wheel travel of the howitzer provides its towing along the highway at speeds up to 80 km / h, and when driving on rough terrain - up to 20 km / h. 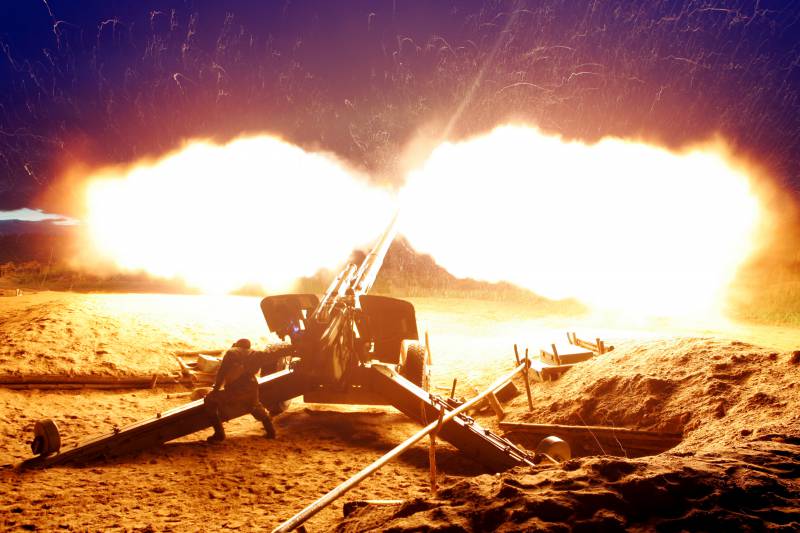 The ammunition 152-mm towed howitzer MSTA-B consisted of several types of high-explosive shells (including 3OF61 extended range having a bottom gasifier), shells Staging radio, cassette shells with a high-explosive and cumulative-fragmentation submunitions, smoke bombs-designators . Also with a howitzer can be used adjustable artillery ammunition 3OF39 complex "Krasnopol" with laser illumination of the target. A three-person calculation can highlight a target using a laser target-rangefinder, which is part of the Malachite portable automated fire control system. Small tank type targets can be highlighted from a distance to 4 km at night and 5-7 km in the daytime, larger targets up to 15 km.

The maximum firing range of conventional high-explosive fragmentation projectiles is 24,7 kilometers, 3OF61 projectile with a gas generator of bottom injection and long-range charge - up to 30 kilometers. With the howitzer, all types of separate-charge shots can be used, created for both the towed Msta-B and ACS 2С19 Msta-S, as well as for earlier artillery systems of the same caliber - howitzers D-20 and ML-20, SAU 2C3 " Acacia".

Tactical and technical characteristics of the Msta-B howitzer:

We are in Yandex Zen
155-mm self-propelled howitzer XM1203 NLOS-C (Part 1)
Self-propelled artillery mounts
73 comments
Information
Dear reader, to leave comments on the publication, you must to register.