20 September 2016
33
The new plans of the Russian Helicopters holding regarding the future future of the Mi-38 project have become known. In the next few years it is planned to carry out some refinement of the existing helicopter, as well as test the car in a new configuration. As a result of these works, a new modification of the helicopter should appear, intended for use by the Aerospace Forces. With a favorable course of work, the supply of new equipment will begin at the end of the current decade.


New messages about the future of the Mi-38 helicopter were published by the press service of the holding "Helicopters of Russia" 8 September. It was reported that at present the holding’s enterprises are conducting additional certification tests of the Mi-38-2 helicopter. The purpose of the current work is to expand the operational characteristics of the machine for subsequent deliveries to the armed forces. On the basis of the existing Mi-38-2 helicopter, it is planned to create a wide range of special modifications intended for the Russian Ministry of Defense. All the necessary work is planned to be completed in the next few years. 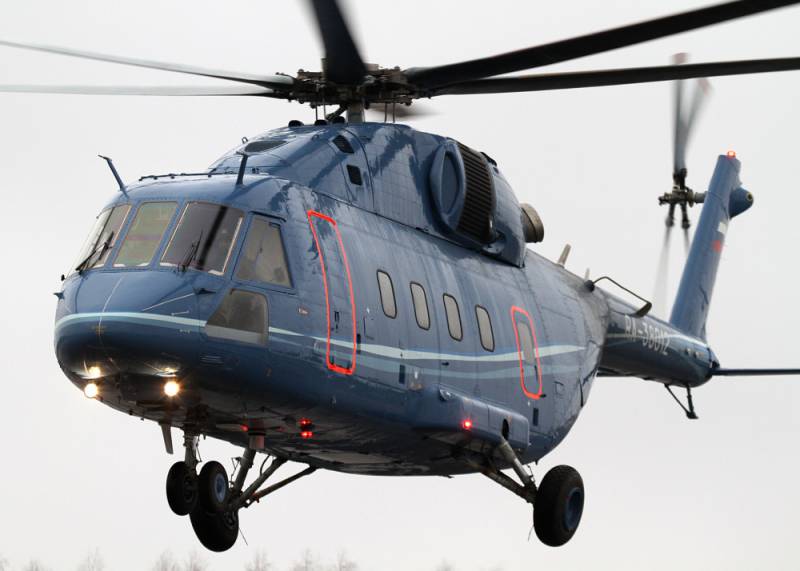 To date, the military department has approved the technical appearance of the new helicopter modification, which made it possible to proceed to the necessary work to change the design and adapt the technology to the new tasks. It is currently planned to make the Mi-38-2 the basis for the search and rescue, evacuation and resuscitation and transport-assault helicopter. Projects of the jammer and special modification for work as part of the Arctic grouping of troops are also being developed.

Now the designers of the organizations of the Russian Helicopters holding are solving several main tasks in the framework of the new project. First of all, it is necessary to increase the carrying capacity and maximum flight altitude. It is also planned to test the prototype with a cargo boom and external suspension. Another stage of inspections will take place on the ground in the conditions of a large amount of dust, sand or snow. All such tests are necessary to confirm the characteristics of the updated machine and to establish their compliance with the requirements of the customer. According to the results of the necessary checks, the issue of adopting and deploying mass production will be resolved.

According to existing plans, all the work on changing the configuration and other improvements of the Mi-38-2 helicopter will be completed in the next few years. It is planned to complete the creation of a machine for the armed forces in 2018. In the future, serial construction of machinery can begin. As the leaders of the holding company “Helicopters of Russia” note, in the production of new equipment, aggregates and components exclusively of domestic production will be used. Imported products previously used are excluded from the project.

Successful implementation of ongoing work will allow the military department to place an order for the mass production of new equipment, which has some advantage over the existing samples. Fulfillment of such an order will make it possible to supplement, and in the long run, replace helicopters of the Mi-8 and Mi-17 families. Due to some technical and operational advantages, Mi-38-2 helicopters can become a more effective means of solving existing problems. In addition, the supply of new vehicles to the armed forces will be the long-awaited completion of the project, which has been going on for several decades.

Recall that the development of a promising multipurpose Mi-38 helicopter began in the 1981 year. The aim of the project was to create a new car, in the design of which new ideas and solutions would be used. From the predecessor in the face of the Mi-8, the new Mi-38 should have been distinguished by improved performance, primarily flight and operational. Nevertheless, the existing plans were not realized immediately. Already in the eighties, the Moscow Helicopter Plant. M.L. Mile faced serious problems, due to which the pace of work fell, and the timing of completion of the main stages significantly shifted.

For one reason or another, the first demonstration of the layout of the Mi-38 took place only in 1989. The venue for her was the air show at Le Bourget. Over the next few years, a number of new demo products were introduced. In 1993, construction began on the first two prototypes that were to take part in the trials. The assembly of the first prototype took about nine years. Due to lack of funding, their own problems and the problems of related enterprises, the authors of the project managed to complete the first copy only in 2002 year. In particular, to speed up the work and improve the export potential, it was decided to use some components and assemblies of foreign manufacture. In 2003, flight tests of the first helicopter started.

The overall appearance of the new helicopter was formed in the late eighties, and still has not undergone major changes. The composition of equipment, power plant, etc., changed, but the general features of the machine remained the same. The Mi-38 project proposes the construction of a classical helicopter with a six-blade main rotor. On the keel is mounted tail rotor with four blades of the X-shaped design. A classic layout is used for multi-purpose and transport helicopters with a cargo cabin, which occupies most of the helicopter, above which the engine compartment is placed. To facilitate the design of the power elements of the helicopter are made of duralumin. Elements that are not subjected to heavy loads are made of metal or composite materials.

In accordance with the version of the project, developed by the beginning of the 38s, the Mi-127 helicopter was supposed to receive two PW2500TS turboshaft engines of the Canadian company Pratt & Whitney with a capacity of up to XNUMX hp. each. An interesting feature was the layout of the engine compartment: to improve aerodynamics, the engines are placed behind the main gearbox. The air intakes are located on the sides of the fuselage. 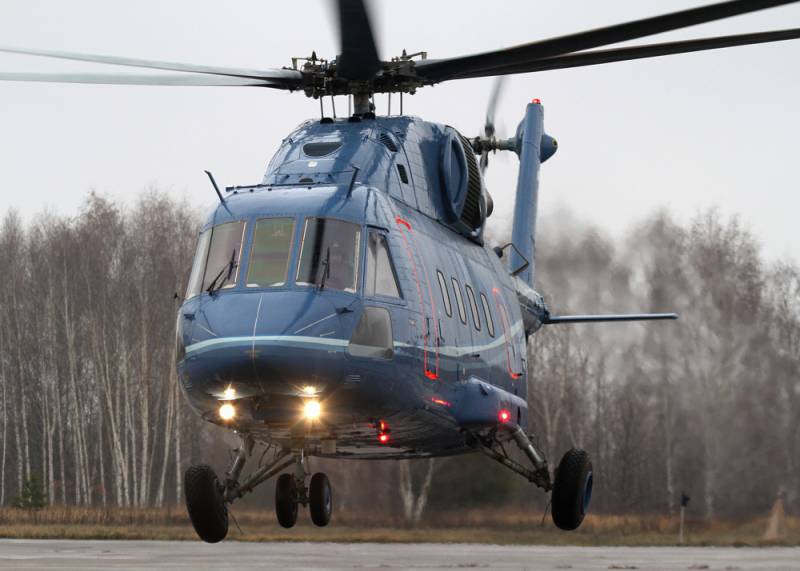 The helicopter has a total length (including screws) 25 m with fuselage length m and 19,95 width m. Main rotor diameter - 4,5 m. Height with rotating propellers reaches 21,1 m. Empty mass of the Mi-7 is 38 t, maximum take-off - 8,3 The cargo compartment has a length of 15,6 m, a width of 7 m and a height of 2,34 m. Inside the cab, you can carry a payload weighing up to 1,8 t, on an external sling - up to 5 t. Maximum flight speed is 6 km / h, cruising - 320 km / h h Flight range reaches 295 km. The practical ceiling is 1300 m. At the same time, during the tests, an experienced helicopter without a load managed to rise to an altitude of 5100 km. The car should be driven by a crew of one, two or three people. In the cargo compartment can be mounted seats for passengers. The economy class cabin accommodates 8,62 seats, the VIP version 30.

At the beginning of the two thousandth, when an experienced helicopter of a new type was put to the test, the prospects for the project were in doubt. The fact is that the civilian market showed no interest in such development, and the Russian Ministry of Defense did not consider the possibility of acquiring the Mi-38 due to the unacceptably wide use of imported components. In this regard, for several years, the future of the new helicopter remained uncertain.

A way out of this situation was the revision of the project, aimed at increasing the share of components of domestic production. According to the updated project, it was decided to complete the second prototype Mi-38, the assembly of which began in the late nineties. The second prototype retained the imported engines, but received the domestic avionics complex IBKO-38, developed by Transas Aviation". The so-called glass cabin with a set of various modern equipment. The construction of the second experimental machine was completed at the end of the last decade, and soon it went to the test.

In 2013, the third flight copy was built, which became the first model with a complete set of main components of domestic production. The main difference between the third Mi-38 and its predecessors was the TV3-117 turbo-shaft engines developed in Russia. On take-off mode, these products develop the power of the 2500 hp, at the emergency - 3500 hp. Replacing the imported power plant allowed us to achieve some positive economic and operational results without any loss in performance. The main parameters of the helicopter after this update either have not changed or increased. The updated modification of the multipurpose helicopter with TV3-117В engines is designated as Mi-38-2.

Since the fall of the year 2014, the fourth experimental helicopter has been used in tests. In terms of configuration, it was basically similar to the previous prototype, although it had some differences in the form of using some other onboard systems. Later, both Mi-38-2 helicopters took part in the tests required to obtain permits. 30 December 2015, the Federal Air Transport Agency issued a certificate for a generic version of the Mi-38. Certification of passenger, search and rescue and other modifications was also planned.

According to reports, to date, the Kazan helicopter plant managed to assemble the fuselage for the first serial Mi-38. In the foreseeable future, this machine can be completed in the required configuration by the customer, and then transferred to it and put into operation. At the same time, however, an order for a large number of serial helicopters of the new model has not yet been received.

Thus, more than three decades have passed from the start of design work to the receipt of documents allowing the launch of a new helicopter. In recent years there has been a significant acceleration of work, which, in particular, has led to a noticeable update of the project. As a result of recent improvements, the helicopter was able to obtain the required documents, as well as interest an important customer in the person of the Ministry of Defense. Relatively recently, an order appeared to create specialized military modifications of the existing Mi-38-2 vehicle. Work in this direction should be completed in the next few years. 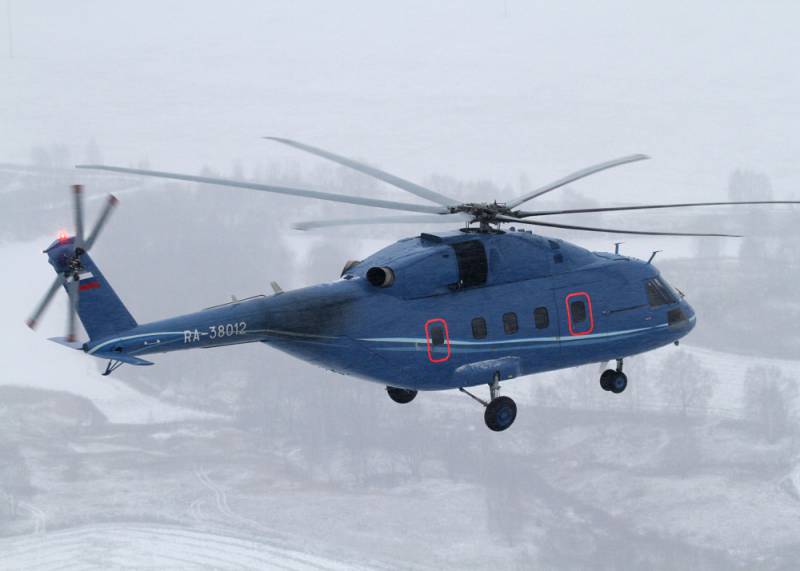 According to published information, the technical assignment from the military department implies the improvement of some basic characteristics. First of all, it is required to increase the maximum take-off weight and altitude. It is also planned to use the existing helicopter as a platform for various new units and assemblies, allowing the basic helicopter to “master” one or another new specialty. The result of a new project being developed by order of the military should be several new versions of the Mi-38-2, suitable for use in various purposes and different situations.

The press service of the holding company "Helicopters of Russia" reports that work is underway on the transport and airborne modification and jamming helicopter. Also, the military want to get search and rescue and evacuation resuscitation helicopters, as well as a special version of the machine, adapted for work in the Arctic. It should be expected that all new projects will use a unified approach, implied by the basic design of the helicopter. The existing platform in the form of a Mi-38-2 helicopter will be equipped with equipment appropriate for its intended use. The positive consequences of this approach to development and production are obvious.

Despite the unacceptable delay of work in the past and the repeated displacement of the deadlines for the completion of certain main stages, the project of the multipurpose Mi-38 helicopter was nevertheless brought to the end of testing and certification. In addition, the development organization was able to interest the Ministry of Defense with its new project, resulting in the emergence of several specialized helicopter modifications in the foreseeable future. According to current plans, all such work should be completed in 2018 year. In the meantime, the specialists of Russian Helicopters are engaged in changing the existing project in accordance with the requirements of the customer.