The main rival of the Kalashnikov rifle is the American M16

January 12 2012
50
For a long time after the appearance of the M16 in service, it has been continuously improved. Some experts in the military, mostly Western, consider it a leader in the assault rifle segment. 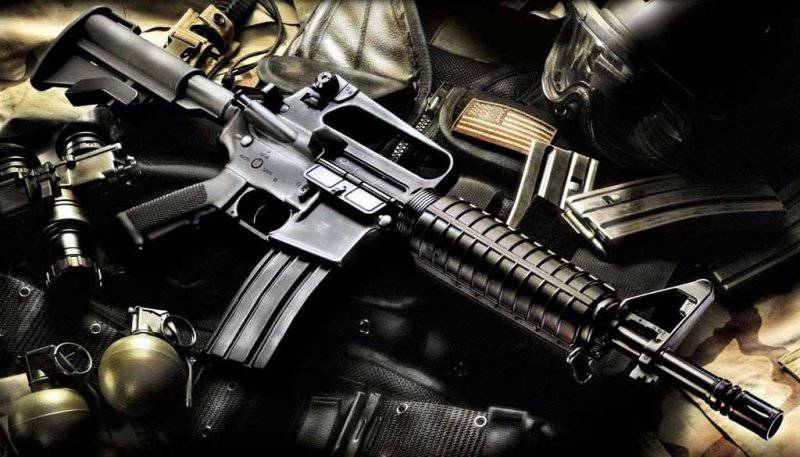 The flaws manifested during the combat use of the M16 А1, led back in the 68 year to the approval of the ARSAP program in the United States. The program was designed to create a promising small arms. The main idea of ​​the program is the creation of the FRS infantry complex of the future. The complex should be able to fire in short bursts and have a grenade launcher. Only a decade later, this project, which was already part of another JSSAP program, was implemented in the modernized 16 А1 Е1 М. The rifle was named "M 855".

As a result of a complex test of small arms ammunition for the countries of the NATO bloc becomes 5.56х45. The cartridge is designed by the Belgian company FN. The cartridge was created for the Belgian FN Minimi light machine gun. The creation of the M16 A1 E1 rifle and the standardization of ammunition led to the required breakdown characteristics and created the prerequisites for the decision of the United States military to re-equip the army with a new rifle.

The company Colt, the creator of the upgraded rifle began rework weapons under the standard cartridge. The American name of the cartridge - 855 M. During the work, several options for upgrading have appeared:
- standard 701 model with fixed short bursts;
- Modernization with a heavy barrel, another name for an automatic machine gun, model 741;
- modernization under an automatic carbine, model 723, which had a mode of firing with fixed short bursts;
- Colt Commando, model 733, or M16 A2, American submachine gun. 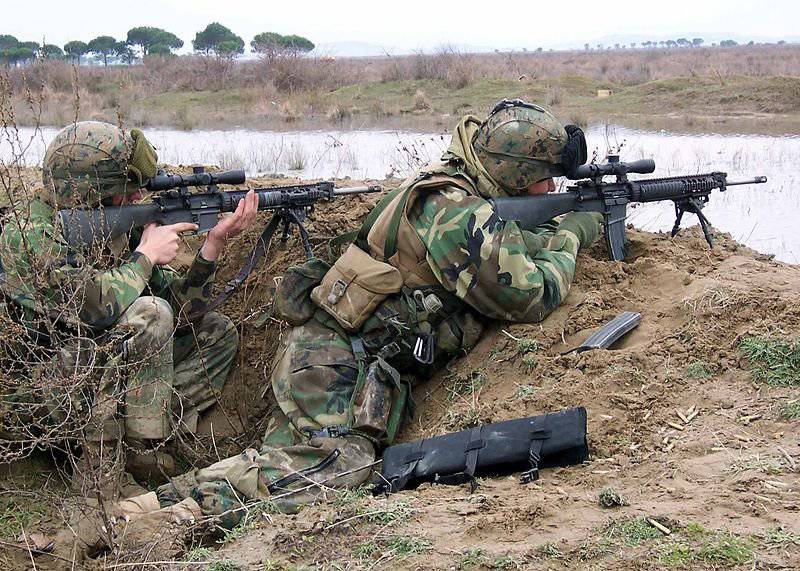 In 81, the standard M16 A1 E1 rifle began to undergo a series of tests in the United States military. After successful tests in 82, the rifle enters the military under the name M 16 A2. The start of deliveries of the 16 A2 M to the units of the US Navy MP 84 year, to the land units of the US Army –85 year The use in the rifle of a new cartridge with a heavy bullet, required from designers to increase the slope of the rifling from 305 mm to 178 mm. The steepness led to an increase in the stress of the material of the trunk. During the modifications, the rifle barrel diameter increases, with it, the overall weight of the rifle increased by 170 grams. The range of the rifle with a cartridge 5.56x45 mm - 800 meters.

The fixation mode is implemented using a new part in the trigger - ratchet. The latest version of the M16 A2 was delivered only to US MP units.
In the rifle reinforced receiver, on the right was mounted visor reflection sleeves forward. In the M16 A1 rifle, such a visor was included in the additional equipment and installed independently. The functions of the compensator, due to the lack of 2-x slots in its lower part, took over the flame arrester. The upper slits of the muzzle brake passed through a certain part of the powder gases. Gases, going up and to the right, compensated withdrawal of the weapon when firing up, and in addition reduced dust formation at removal of gases. These innovations were estimated by the United States infantrymen in the operations of the operation “Desert Storm”. Butt and forearm were made of polyamide with good thermal insulation characteristics. The two halves of the forearm, lower and upper, became completely interchangeable. Butt of a rifle in order to stabilize and hold weapons increased in area and extended by 1.5 centimeters. Has changed and pistol grip - changed the outlines of the details. There was a modified swivel under the belt, for carrying weapons in combat readiness. The barrel has a tide for docking the bayonet. Bayonet to M16 A2 - M9. Suitable for early M16 and M16 A1. Instead of metal shops, the 16 M А2 received light plastic shops for 30 ammunition.

Opinions of American military specialists after using the rifle in the operations of the Persian Gulf - the rifle does not fully meet modern requirements for weapons of this class.

Interesting tests МХNUMX А16 and АК-2 passed in the Soviet Union:
- the recoil momentum of the American rifle is more by one third than that of the domestic AK-74;
- continuous shooting at AK-74 showed the best results;
- single shooting at M16 A2 is better;
- readiness for combat use in various conditions for AK-74 far exceeds the readiness of М16 А2.

Series production rifles M16 A2, M 16 A1 and M16 - 64-89 year. In the United States, the Colt Industries Corp Company carried out mass production. In 90, the development of the following modernization of the M 16 A3 began. At about the same time, the production of rifles was transferred to FN Manufacturing Inc. Rifle production at this company was cheaper for the United States Army - 420 vs. 455 dollars at Colt. At 97, more than 10 million units of the M16 rifle and its modifications were produced.

At present, the National Guard and reservists are armed with the M16 A2. In addition to the United States, the rifle is in service with Brazil, Canada and Fiji Islands. Modernization rifle, model 723 for some time been delivered in the UAE.

In addition to the listed modifications M 16 A2, there is such a modification as the model 635 - software "Colt-Commando". Developed in 82 year. Available to date. It is in service with a number of police formations, the protection of nuclear facilities, in parts of the US MP.

In 94, the United States Army entered into service new versions of the M16 rifle - M16 A4 and M 16 A3. The main differences from the M16 A2 - rifle is equipped with a "Picatinny rail" strap. In addition to all modern devices that are installed on the bar, it is possible to install a removable handle like the M16 А2. 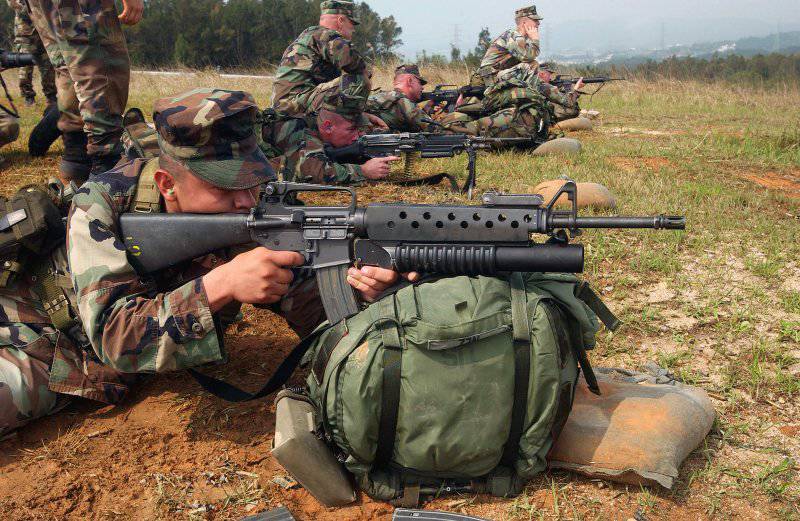 On these rifles used a new system RIS - handguard with the upper and lower guide. On the lower bar mount grenade M203.
In the 94, the carbine is adopted, the 720 model using the 5.56x45 mm cartridge. It is designated as M4. In addition to the army, the M4 comes into service in the special operations of the United States. Soon these weapons arm the officers of the army, the composition of military vehicles, military units of the rear units. The weapon is still in service.

In the 96 year, taking the 16 А3 base for М, they create another М4 А1 carbine. It gives the weapon a mode of using short bursts. Especially for the special forces of the United States Navy - sea seals, developed on the basis of the M4 A1 - carbine Mk.18 Mod. 0 Close Quarters Battle Rifle (CQBR). The carabiner has a shortened barrel -254 mm. The rifling of the weapon barrel is changed from 178 mm to 262 mm. Installation of equipment for flameless and silent firing is possible on the combined muzzle brake-flame arrester.

The experience of using the M2002 A10 and M4 carbines in combat operations in Afghanistan 1-4 brought them unflattering evaluations. The main drawback remained - sensitivity to pollution. But this only led to the fact that they began to clean these weapons in combat units, almost daily. Rubbed also cartridges for carbines. The well-known principle of the American military - even if the weapon is lined up just once, clean it and prepare it for a new use.

In addition to sensitivity to pollution, other shortcomings were revealed against the background of the same M16 A2:
- reduced barrel reduced the initial speed of the bullet;
- decreased range of sighting efficiency;
- overheating of the forearm and barrel with intensive shooting;
- increased wear of the main parts;
- The overall reliability of the system has decreased. 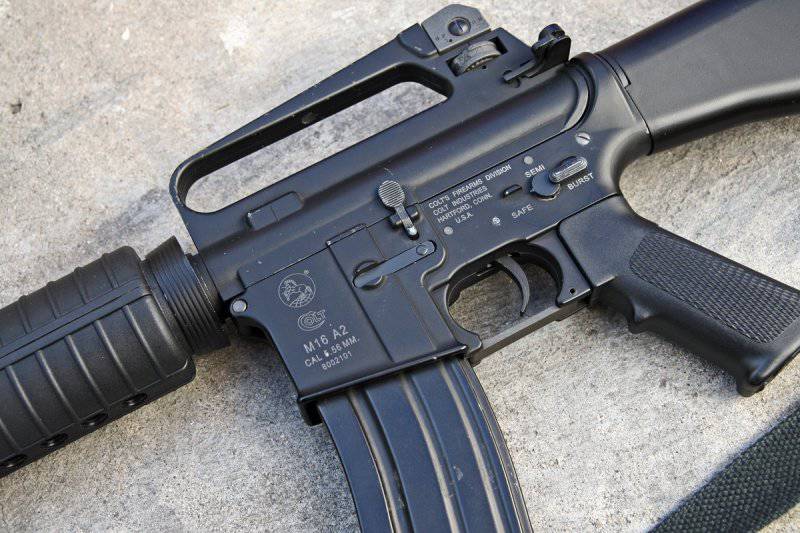 But these shortcomings did not deter the US military, weapons are very popular in the armed forces of the United States. Designers are still developing various projects for upgrading the base M16. In addition to the development of weapons, surveys are being conducted on new types of ammunition for them.
In the meantime, the rifle in all its modifications is the main armament of infantry units not only of the United States, but also of many states of the modern world.

In general, the “black rifle” turned out to be a rather successful model of personal armament of military units.