15 September 2016
42
June 17, 1955 made its first flight in the Soviet Union jet passenger aircraft Tu-104. This aircraft largely determined the further development of the passenger aviation on the planet, and its creation was an important milestone in stories world aviation. After about a year, 15 of September 1956 of the year (exactly 60 years ago), the Aeroflot Tu-104 airliner made the first regular flight en route Moscow - Omsk - Irkutsk. Thus began the history of domestic jet passenger traffic.


The first jet passenger liners Tu-104 began to arrive in the civilian fleet in May 1956 of the year, and already on September 15 the first regular flight en route Moscow-Omsk-Irkutsk was made. The pilot in this flight was piloted by E.P. Barabash. During 7 hours of 10 minutes with the interim transfer in Omsk, the plane managed to fly to Irkutsk, covering the distance in 4570 kilometers. October 12 1956 pilot B. P. Bugayev made the first international flight on a Tu-104 aircraft on the Moscow-Prague route, and soon Tu-104 planes took to the lines that connected Moscow to Amsterdam, Berlin, Brussels, Paris and Rome. 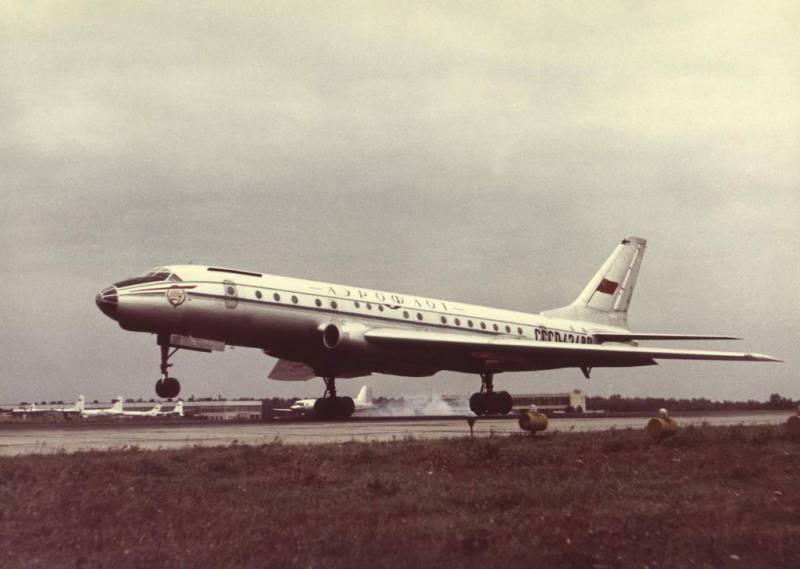 In those years, it was impossible to imagine that a country that had just rebuilt from the ruins after World War II would be able to make such a technological leap ahead of the countries of the West in its designs. From the 1956 year, when the British passenger jet De Havilland DH-106 Comet was suspended due to a series of air crashes, and until October 1958, when the American Boeing 707 jet was put into commercial operation, the Soviet Tu-104 jet remained the only jet passenger aircraft in the world. In September, 1957, the Tu-104, flew to New York from Vnukovo Airport, which, according to the Western press, "confirmed the priority of the Soviet Union in the development of jet aircraft."

The history of the jet liner Tu-104

In 1953, the OKB leadership, headed by the leader A.N. Tupolev, based on the positive experience in the design, testing and start of serial production of Tu-16 jet bombers, came up with a proposal to the USSR leadership on the creation of a passenger aircraft equipped with the Tu-16 serial turbojet engines - turbojet engines. Soon Tupolev himself prepared and made his proposal to the Central Committee of the CPSU. In the report, the attention of the state leadership was focused on the advantages of the modification approach to the design of the first Soviet passenger aircraft. Among the operational moments of the novelty stood out: high cruising flight speed (should have been three times higher than the flight speed of the main passenger aircraft of Aeroflot of those years Li-2 and Il-12); the ability to fly at high altitudes, without chatter and shaking; high passenger capacity and carrying capacity with a sufficiently high comfort. For the first time in the Soviet Union, it was a question of developing civil air fleet mass aircraft of the "liner" class, which could turn high-speed air transport into a mass vehicle.

At the same time, a significant economic gain, in the opinion of the Tupolev Design Bureau employees, should have been given precisely the modification approach to creating a passenger plane based on the Tu-16 long-range jet bomber launched by the Soviet industry. At the same time, it was intended to make full use of the accumulated experience of building, refining and operating a prototype bomber, which was to ensure the safety and high reliability of operation, so important for civil aviation aircraft. Also, the cost of sending the liner to mass production was significantly reduced, due to this its cost was reduced and the economic characteristics of the machine increased. The problems of training ground and flight personnel for the new passenger liner were alleviated, primarily through the use of specialists who had already been trained in the Air Force on military aircraft of similar design, operational and flight characteristics. 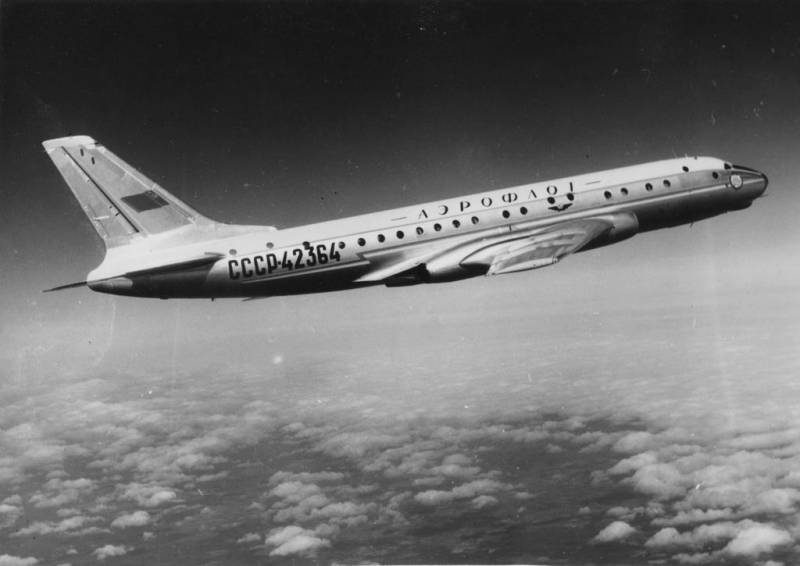 Even before making an official decision to build the aircraft, the Tupolev Design Bureau began work on its design. Resolution of the USSR Council of Ministers No. 1172-516 on the creation of a long-distance passenger high-speed aircraft Tu-16P (the designation by the Tupolev Design Bureau is the 104 aircraft, then adopted as official Tu-104, after it in the official designation of Tupolev passenger aircraft the four were always the last number).

The new passenger aircraft was a twin-engined turbojet nizkoplan with the location of the engines in the swept-wing root and one-fin tail. When creating the Tu-104, the designers of the Tupolev Design Bureau decided to leave part of the design of the Tu-16 jet bomber. In particular, the wing, tail, landing gear, cockpit layout and flight navigation instruments were borrowed from the combat aircraft. At the same time for the passenger liner redesigned fuselage and air intakes of the engines, achieving greater capacity. The designers of the design bureau created new units for the air conditioning system, shadowless interior lighting, electrical appliances for heating and cooking, and radio passenger cabins. 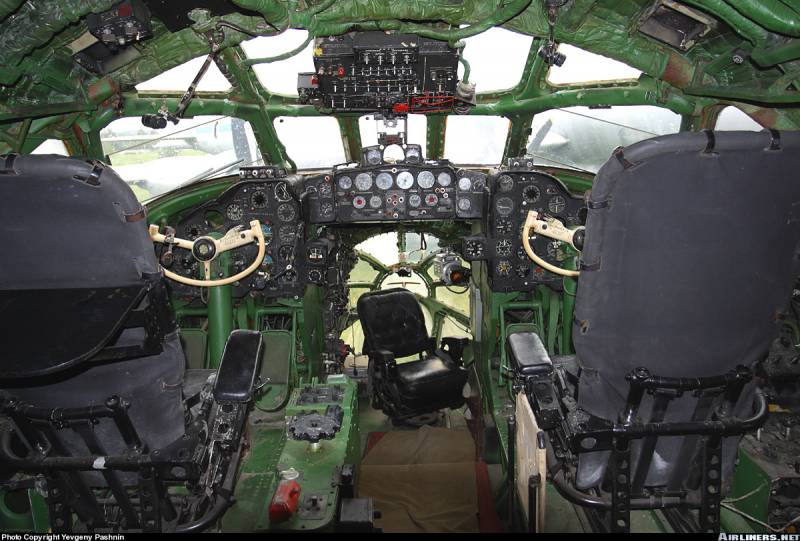 In the course of the work on the creation of the Tu-104 passenger liner, the designers paid special attention to ensuring the high reliability of its design, as well as increasing the service life of the aircraft’s glider and, in particular, of its pressurized cabin. Aware of the problems the British faced with the passenger Kometa, in the course of carrying out the program of building a Soviet jet airliner, its glider for the first time in its domestic practice underwent cyclic tests in the new specially built TsAGI hydro basin. Conducting these tests allowed the designers of the Tupolev Design Bureau to identify weaknesses in the design of the aircraft, to make the necessary improvements and to ensure the necessary durability of the airframe.

At the same time, for the Tu-104 aircraft, a search was carried out for rational layout arrangements for the arrangement of passenger cabins, utility rooms and kitchens. Work was being done on the design of comfortable passenger seats, the shade-free lighting of the liner’s salons, the color schemes of the aircraft’s interiors and the materials intended for lining and upholstery of partitions and chairs were selected. The interior of the passenger aircraft was originally designed from the premise that a sense of safety and comfort can be provided by creating a “home environment” inside the liner (the realization of the idea of ​​a salon-house). Hence there was a certain congestion of the interior of the aircraft with elements of the traditional imperial style, as well as the fractionality of the total volume and individual parts, the use of designs and forms of carriage architecture, a rich walnut and gold finish. However, all these excesses and features in the interior were characteristic only of the first prototype aircraft. Later, already in the serial Tu-104, the interior of the passenger compartment became much more “democratic”, approaching the generally accepted world standards of those years. 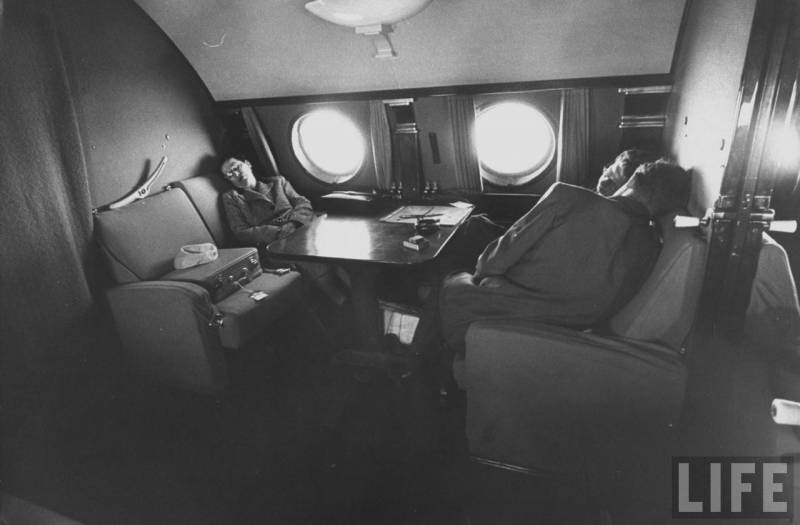 Work on the project of the first Soviet jet passenger aircraft went at a record pace: in December 1954, the state commission approved the layout of the future airliner, and in March 1955, the first sample of the Tu-104 was fully prepared at the Kharkov Aviation Plant in March. An experienced passenger aircraft was immediately transferred to the Zhukovskaya flight test and development base, where the process of preparing the aircraft for a series of flight tests began.

17 June 1955, the crew of test pilot Yu. T. Alasheeva performed the first flight on a new aircraft. As a result of tests that lasted until October 12 of the same year, the Tu-104 airliner was recognized as fully suitable for serial production and subsequent regular operation. 22 March 1956, a prototype Tu-104 with Soviet diplomats on board, flew to London, where N. S. Khrushchev, the first secretary of the CPSU Central Committee, was at that time. The newest Soviet passenger jet aircraft was highly appreciated by foreign experts, who noted that the USSR had brilliantly coped with the task of developing a passenger jet aircraft. It became clear to the whole world community that the aviation industry of the Soviet Union is aimed not only at constantly updating its fleet of combat aircraft, but also at creating first-class passenger aircraft.

The release of the Tu-104 passenger aircraft was discontinued 5 years after the start of mass production of the machine. In the early-mid 1960-s in the Soviet Union, work began on the creation of second-generation passenger liners, equipped with more modern and economical turbofan engines. By that time, the firstborn of Soviet jet civil aviation had become morally obsolete. Despite this, the aircraft continued to operate and operated regular passenger flights up to the 1979 year. During production, the Tu-104 aircraft was repeatedly upgraded. Over time, the aircraft engines were replaced with more reliable and powerful ones, modifications of the liner were released with an increased number of passenger seats, and the radio engineering and flight-technical equipment was constantly updated. In total, three serial aircraft factories (No. 135 in Kharkov, No. 22 in Kazan and No. 166 in Omsk) collected more than 200 aircraft in versions of the Tu-104, Tu-104А and Tu-104Б, which differed from each other in the number of passengers carried 50, 70 and 100, respectively), as well as some elements of construction and equipment. 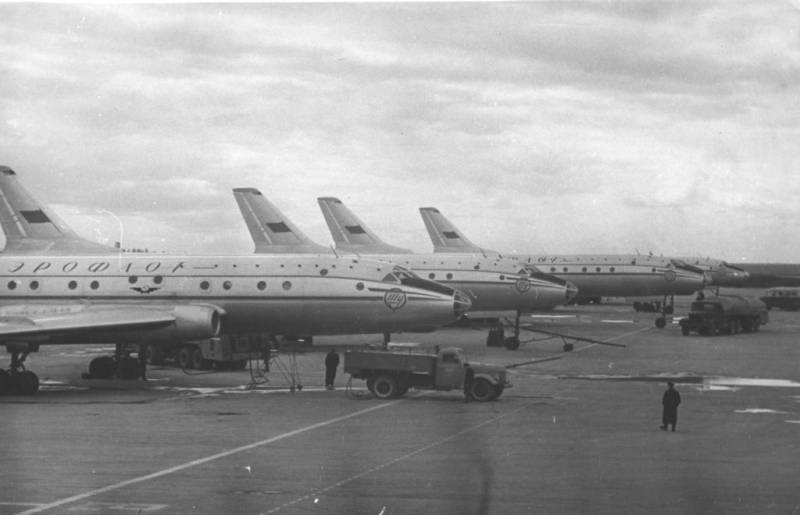 In the period from 1957 to 1960, the TU-104 managed to set 26 world records of payload and airspeed more than any other passenger liner of this class. The legendary aircraft was operated until the end of the 1970-ies, after which it was finally removed from Aeroflot regular flights. The last flight of the Tu-104 passenger aircraft made 11 on November 1986, when one of the surviving machines, flying out of the Kola Peninsula, successfully landed in Ulyanovsk, where the plane took its rightful place in the local civil aviation museum.

On the basis of the Tu-104, a new passenger liner for local airlines, Tu-124, was developed, which belonged to a transitional generation of passenger aircraft. In particular, he has already received dual-turbojet engines. However, this machine did not receive due popularity and was discontinued. At the same time, the experience of creating Tu-104 and Tu-124 jet passenger aircraft was subsequently used by the Tupolev Design Bureau when creating the Tu-134 passenger aircraft - a very successful airliner that has been in operation since 1963 of the year to the present day. 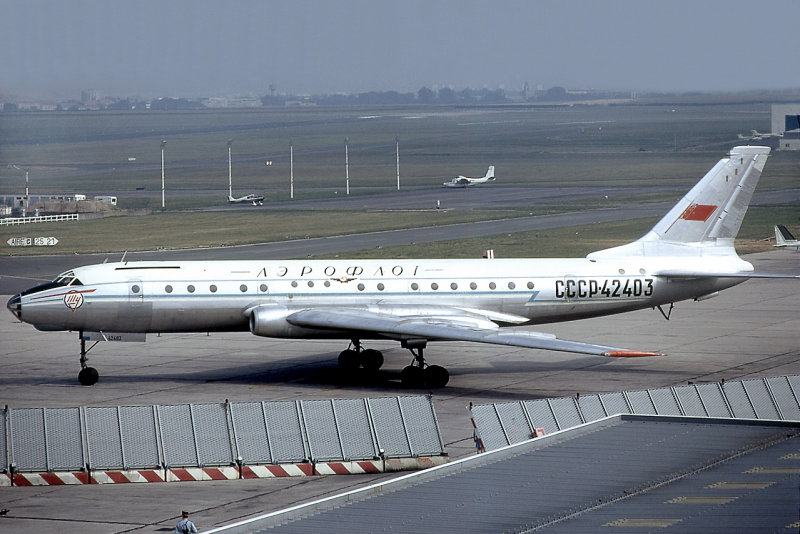 Performance characteristics of the Tu-104B (extended version with 100-local fuselage):