President Putin is going to start with tough measures 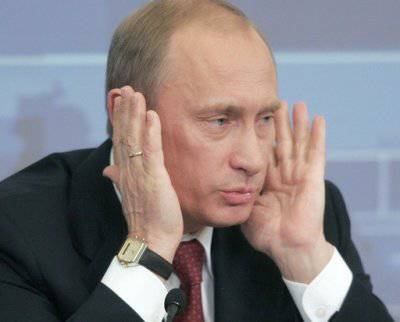 Of course, the main political event of the current year for Russia will be the presidential election. It would seem that their results have already been predetermined: Vladimir Putin is the undisputed leader of the race, there are no rivals who can compete with him. But after the recent fall in popularity of the ruling party and the many thousands of protest actions among voters expressing dissatisfaction with the results of elections to the State Duma, Putin’s victory in the first round of elections has been called into question. In the event that a second round is needed, a radical change in the balance of power in the next six years of Putin’s rule is possible: he will lose the status of an undisputed leader, whose power is final and not subject to discussion.

For the time being, the presidential candidate is conducting maneuvers, trying to assess the seriousness of the intentions of the protesters and find a limit for possible concessions to the authorities. The public has already promised political reforms, but these promises were voiced by the outgoing president, which naturally reduces the likelihood of its implementation. Only one thing is for sure: a victory for the main candidate will be ensured by all possible means. It is likely that the lack of public support is compensated, as in the elections to the State Duma, at the expense of the administrative resource.

The problem is that the new president will have to compensate for the obvious lack of legitimacy of his rule. The mechanism of this compensation is quite obvious: to replace the attempts to portray the search for a compromise will come the policy of "tightening the screws." Most likely, for this, a specious excuse to fight against extremism will be taken, because, as the parliamentary company has shown, almost any criticism of the authorities can be qualified as an attempt to incite socially discord. Indirect evidence that the Kremlin is considering such a scenario is the replacement of Sergei Naryshkin as head of the presidential administration Sergei Ivanov, as well as the transfer of Vyacheslav Volodin to the post of Vladislav Surkov. Both new appointees prefer force-based methods for solving emerging problems to avoidable maneuvers and confusing combinations.

Presumably, Dmitry Medvedev will be the head of the government, because such is the mutual agreement of the participants in the ruling tandem. Most likely, this is the price of the voluntary refusal of the current president to participate in the presidential election. However, the electoral point of view allows Medvedev to consider ballast rather than a full-fledged supplement to the future president. Having lost the last of the remnants of the image of a liberal and ardent reformer during the parliamentary campaign, the current president did not acquire a new political capital. Nobody took seriously the initiative of Medvedev to create a “big government”. However, the resignation of Finance Minister Alexei Kudrin showed that Medvedev did receive the opportunity to influence the future composition of the Cabinet of Ministers. In the near future it will become clear how far his powers extend. Recall that, even at the United Russia congress in September, Medvedev, if he was appointed prime minister, promised to make drastic changes to the government.

The impetus for the renewal of the image of the government, which Vladimir Putin is currently personifying in the eyes of the voters, could be a thorough personnel purge. Among the most likely layoffs are the resignations of unpopular ministers, including Tatiana Golikova, head of the Ministry of Health and Social Development, and Andrei Fursenko, head of the Ministry of Education. Also on the sidelines there is talk of a possible combination of "shake-up" of the government with the reform of the public administration system: it is possible that the authorities will abandon the three-tier system of departments adopted in 2004. It is possible that the ministries united in the course of administrative reform - the Ministry of Social Development and the Ministry of Health, science and education, mass communications and communications - will be divided again.

It also remains an open question about the length of time Medvedev will be serving as head of government. Most observers are inclined to think what is left of him for long: he can turn into a political victim of unpopular economic reforms that the government will have to conduct after the elections.

The general growth of discontent and the mass protest movement opened new perspectives for the opposition. The only question is whether she will be able to use them.

The December events showed that the result obtained for the systemic opposition became more than satisfactory, since it exceeded that which could be expected in the implementation of the inertial scenario of elections. Representatives of the parliamentary opposition refused to surrender deputy mandates, they are not interested in the early dissolution of parliament. It is also unknown whether the parties will take part in large-scale control over the presidential election. It is this kind of observation, and not the webcams proposed by Putin, that can ensure the holding of fair elections: according to the law, only observers from candidates and media representatives can be at the polling stations. But since the participation of leaders from the systemic opposition in the presidential elections is mostly nominal, the fact of the presence of broad public control in the elections remains questionable.

The non-systemic opposition continues to fully comply with the metaphor Putin gave her, the “Brownian Movement.” The only element that unites her is the reluctance to see Vladimir Putin as president over the next 12 years. In addition, at the moment there is no opposition candidate who can be supported by the majority of the country's population. However, the situation may quickly change, recently the middle class has demonstrated a high capacity for self-organization, and this can create new leaders. If earlier a fundraising was carried out for a new anti-corruption project of Navalny "RosPil", now this scheme is used to mobilize participants in rallies. Alexander Navalny gradually acquires the status of a political leader from the people, without creating any political structure for this. By launching the slogan "the party of crooks and thieves," Navalny managed to turn the parliamentary elections into a referendum on distrust of "United Russia" and the existing vertical of power. And the 15 days he spent in the SIZO together with other rally participants made him a hero — December 24 greeted him with a standing ovation on Sakharov Avenue. At the moment, Navalny prudently does not declare his political positioning, which allows him to like many. However, he does not exclude the possibility of creating a new political party, as well as participation in elections, but only after the registration of all parties by the Ministry of Justice, and the CEC - the registration of all candidates.

Next year, the process of active formation of new political movements and parties can begin, but this can happen only if amendments to the laws on the political system initiated by President Medvedev after the December events are made. If this happens, then the creation of the party will not require 45 thousands of votes, but only 500. However, this does not at all mean that powerful parties will immediately appear in Russia, since if their leaders do not overcome their own ambitions, freedom to form political associations will only lead to their atomization.