5 September 2016
62
The tests of the prospective self-propelled anti-tank gun (SPTP) 2С25М Sprut-SDM1 are in progress. After completing several stages of testing the latest model of armored vehicles can be put into service and put in a series. So far these works have not been completed, but the industry and the military department are already revealing some of the details of the new project. According to the latest data, the 2C25М project involves the use of some new systems, and also allows the combat vehicle to use new weapons.


23 August edition of "Izvestia" has published some information about the modernization of the weapons complex, inherited the machine "Sprut-SDM1" from the base sample. An unnamed source in the Ministry of Defense told the media about some of the innovations of the promising project. One of the main differences of the updated self-propelled anti-tank cannon is an improved guided weapon system (KUV) using a new missile. Such systems complement other weapons and can increase the maximum range of self-propelled guns. 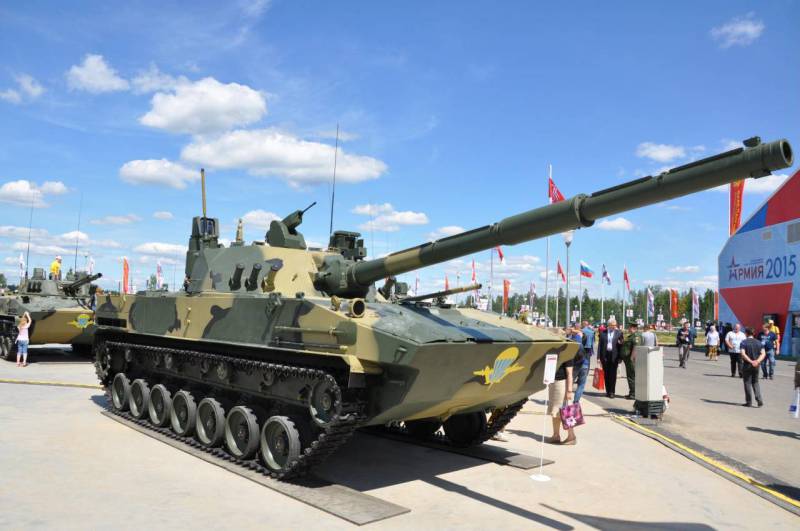 It is reported that the rocket of the new complex is a further development of the product 9М119М "Invar-M" of the complex 9К119М "Reflex-M", which is already in service. The prospective rocket is based on the ideas and solutions of existing systems, but it has some differences related to the improvement of combat qualities and basic characteristics. With the help of this modernization, an armored vehicle carrying new missiles can fight with a wide range of targets, both with protected equipment and with fortifications or manpower.

To combat armored vehicles offered a rocket, which is a direct development of the product "Invar-M". It is equipped with a tandem cumulative warhead capable of piercing through armor of considerable thickness, including those covered with dynamic protection units. The second version of the product receives thermobaric warhead, which is intended for the destruction of various structures and fortifications. Due to the development of two variants of a rocket with different types of warheads, self-propelled gun crews will be able to choose the most effective ammunition in the current situation.

According to reports, the new missile system for the 2S25M Sprut-SDM1 self-propelled gun is based on the achievements of the Reflex-M system. Recall that the complex 9K119M was developed by the Tula Instrument Design Bureau for the purpose of additional weapons tanks and other armored vehicles. Missiles of the Invar family are guided munitions with guidance using a laser beam directed towards the target. The launch of missiles is carried out through the bore of the gun launchers of the 2A46 family, having a caliber of 125 mm In addition to the rocket and launcher, the Reflex-M complex includes sights and guidance systems, an automation unit, etc.

The 9K119M complex missiles have a body weight of more than 17 kg or about 24 kg as part of a shot, completed with a liner and a propelling charge. A solid propellant engine allows a guided missile to reach speeds of more than 280 m / s and attack targets at ranges from 100 to 5000 m. Controlled by a laser beam directed at the target and tracked by the equipment in the tail of the rocket. Tandem cumulative warhead can pierce up to 900 mm of homogeneous armor for dynamic protection. The Invar missiles carry all modern domestic armored vehicles equipped with 125-mm smooth-bore guns. Among the carriers of the Reflex-M complex are all the main tanks that are in service, as well as tools of the Sprut family in towed and self-propelled versions. 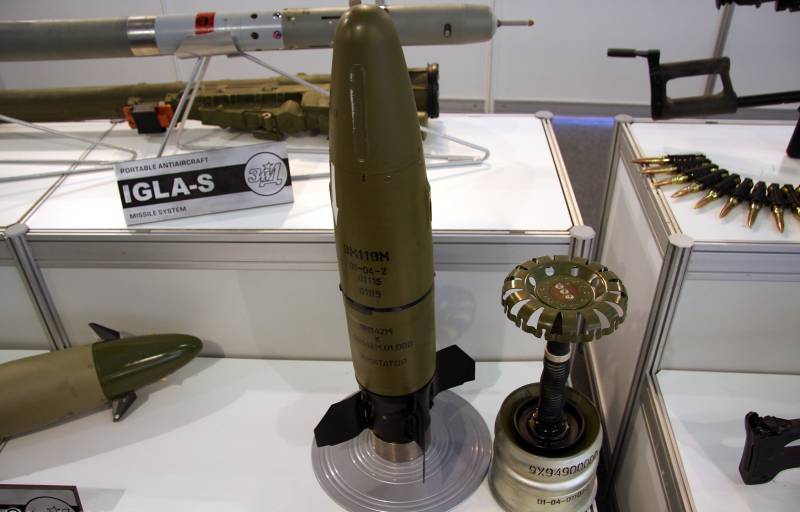 According to recent reports, not so long ago, the KUV Reflek-M underwent modernization, the result of which was the appearance of a new missile with enhanced characteristics and enhanced combat capabilities. Due to modernization, the firing range was increased to 6 km, and the range of targets hit was expanded with the help of a new warhead with a thermobaric charge.

In addition to the upgraded guided weapons complex, the Sprut-SDM1 self-propelled anti-tank gun should receive a number of other equipment of a new type. The project of modernization of self-propelled guns implies the use of a new fire control system (LMS) with enhanced characteristics. It includes a new combined (day and night) gunner's sight, automatic target tracking, a set of sensors for tracking the parameters of the vehicle’s movement and determining weather conditions, etc.

Modernization of the MSA has allowed to increase the accuracy of firing from the main gun, as well as to expand the fire ability of self-propelled guns. In particular, the possibility of firing at air targets moving at low altitudes with low speeds. Thus, SPTP Sprut-SDM1 will be able to fight not only with land equipment, but also with helicopters or unmanned aerial vehicles.

Self-propelled antitank gun "Sprut-SDM1" is the newest development option for the existing combat vehicle operated by the troops. The project of modernization of the existing equipment was developed by the concern "Tractor Plants". One of the main goals of the project was to improve the performance of equipment by changing some of its components. Thus, in the basic version, the Sprut-SD self-propelled gun was based on the chassis of the 934 Object light tank. In the framework of the new project, it was proposed to use the chassis of one of the new serial combat vehicles. Due to this approach, it was possible to create a modern armored vehicle with high mobility characteristics and a complex of rocket-gun armament. 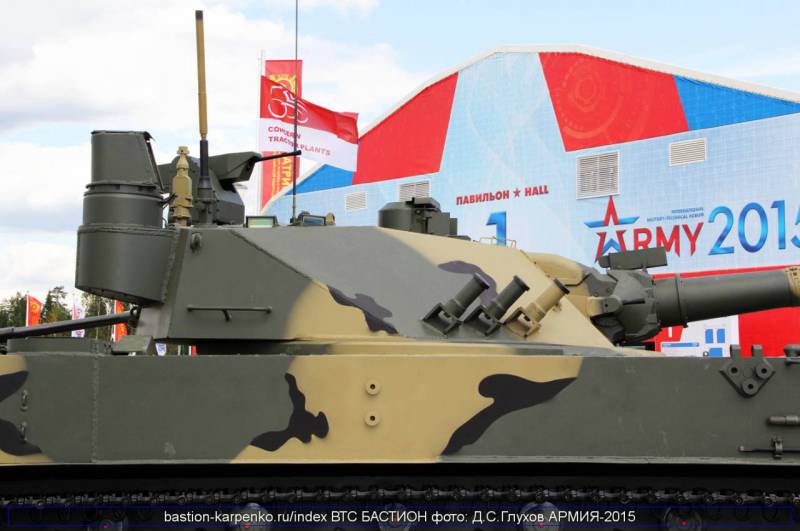 As the basis for the new version of the armored vehicle, the BMD-4M landing vehicle landing gear was selected. This sample has recently entered mass production and is now being delivered to the airborne troops. Thus, bringing the Sprut-SDM1 project to operation in the troops will allow to unify the main samples of the new technology and thereby simplify their use. Despite the use of the new chassis, the overall driving characteristics of the sample remain at the same level. Also there is the possibility of landing by landing or parachute method. The upgraded sample can move both on land and on water.

In addition, the new project provides for some improvements to the existing systems borrowed from the base machine. For example, in the combat compartment of the Sprut-SDM1 self-propelled gun, it is proposed to assemble the units of the updated OMS and some other systems. In the stern of the turret, the installation of a remotely controlled combat module with a PKT machine gun of caliber 7,62 mm is envisaged. The machine gun is controlled from a remote control installed inside the fighting compartment.

The development of the project “STPR“ Sprut-SDM1 ”was completed last year, after which the concern“ Tractor Plants ”built a prototype of the new machine. The first public demonstration of the prototype of the updated self-propelled guns took place at the Army-2015 exhibition. In June of this year, an experienced vehicle showed its capabilities to the command. During the collection of the command personnel of the airborne troops, officers and generals were shown a prototype of a modernized self-propelled anti-tank gun. The demonstration included overcoming obstacles and firing.

Earlier it was reported that the Sprut-SDM1 self-propelled gun is currently being tested. According to the latest data, factory tests are being carried out, which are already nearing completion. In the future, several more inspections are planned, during which all the pros and cons of the prospective sample will be revealed. On 2018, the start of the mass production of new equipment is scheduled. First, the Sprut-SDM1 serial will have to supplement the Sprut-SD, available in the troops, and later it will be a question of replacing older equipment.