January 10 2012
10
Against the background of a heightened interest in events in the Arab world, in European economic difficulties, and in the situation around Iran, which has long been the focus of attention of all world media and leading Internet publications, the modern consumer of news and analytical content, inexperienced by visiting highly specialized sites, receives a relatively small amount of information about events in those countries of the world that are considered to be leaders among the developing countries. If China, which is increasingly perceived as a full-fledged world power, almost past the stage of a developing country, is heard almost daily, then Brazil or South Africa are not often mentioned in the global information flow. The same can be said about India, fighting for the right of world championship in terms of population with China, and, by the way, having to it and more serious claims, including territorial ones. 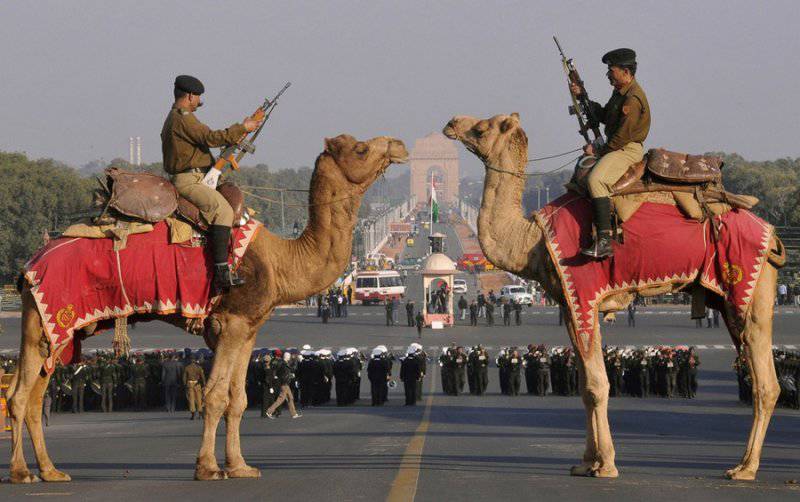 It so happened that the mention of a country in the media is most often associated with events that could in one way or another affect the military-political situation in the world or at least in a single region. This pattern works even now, at the beginning of 2012, when on the tapes of world news agencies more and more messages appear in which the word India appears.

In the first week of this year, India was the source of two important News military-political nature.

The first major news of the year regarding India was related to the construction of tunnels in provinces near the Chinese and Pakistani borders. The tunnels will ensure uninterrupted year-round traffic in these inaccessible places.

The strengthening of the transport infrastructure at the northern frontiers of the country indicates India’s intention to seriously explore the territories that are the subject of a sharp territorial dispute, which can, especially in the case of Pakistan, turn into a full-scale war with far-reaching consequences. The construction of tunnels in the high mountains is a very ambitious project, called upon once again to testify to India’s claims to be strengthened as the leading regional power, followed by the struggle for world superpowers to join the club.

Other high-profile news of the last days regarding India is also directly related to military-political topics. January 9 has become aware of new trials of another modification of the Indian Agni-V ballistic missile, which should be realized in the next two to three months.

Agni-V is a three-stage solid propellant ballistic missile created on the basis of Agni-III. The range of the new missile, capable of carrying a nuclear warhead and having a high accuracy of destruction, will be about 5,5 thousands of kilometers. Thus, India will once again declare the ability of its nuclear-missile forces to hit targets almost throughout the entire Asian continent, including China, not to mention Pakistan.

So, India began this year, as they say, right off the bat. Does this mean that the country is preparing a jerk or is this impression deceptive? In favor of the fact that things in India are not going as perfect as it may seem, says the fact that the tests of the new Indian missiles are regularly transferred. So, the launch of Agni-V was planned several times before the end of 2011. It’s hard to say what prevented the Indians from: purely technical difficulties or financial difficulties on a national scale. However, some arguments in favor of the truth of the second explanation of the missile program’s skidding still exist, and can it be otherwise, especially now when the whole world is at the threshold of an economic abyss, and India, with its still fragile economy, simply cannot stand from this abyss much further than any other developing country in the world.

India’s prospects are not as bright as it was considered a year ago, when some local politicians declared that India could easily catch up with and overtake its main rival, China, in the coming years. The current growth of the Indian economy is 6,9%, which looks more than convincing, at least against the backdrop of Europe, balancing on the verge of complete economic collapse. However, many economists believe that for India, with its population of 1,2 billion, economic growth of less than 7% per year is a serious threat. The figure of the current growth of the Indian economy (about 7%) looks even less significant, since even at the beginning of 2011, economists talked about 8,5%.

Be that as it may, the potential of India is often seriously underestimated. The country has enormous labor resources. Young and cheap labor, which helped China in its time, should help India. In addition, India has taken a very advantageous place in the global division of labor: its significant exports consist of products from the pharmaceutical industry and the iron and steel industry. This export feature favorably distinguishes India from other developing countries in the world, mainly exporting raw materials, which makes them dependent on fluctuations in the level of industrial production in importing countries.

Apparently, despite certain difficulties, the Indian authorities are still confident in their abilities: India continues to strengthen its military power and demonstrate its most serious intentions to its uncompromising neighbors.