1 September 2016
52
Soon, the miracle bracelets will have to help Russian servicemen fight the saboteurs more effectively. In the Armed Forces of the Russian Federation, the novelty will have to arrive before the end of November 2016. It is reported that the Ministry of Defense will spend on the supply of a set of technical security equipment "Strelets-Hour" 396 million rubles. The production of these devices is the company "Argus-spectrum" from St. Petersburg.


For the first time, this complex was shown at the Integrated Security International Salon in 2014. Then it was presented in two forms: “Sentry”, which was intended for the protection of stationary objects of the Ministry of Defense of Russia, and “Checkpoint” - for the protection of mobile objects and the checkpoint itself. For the second time, the set of technical devices “Strelets” was already shown at the Interpolitex-2015 exhibition in Moscow, in the same year, the Strelets-watch was adopted by the Russian army (Order of the RF Minister of Defense 2015, No. XXUMX).

The complex “Sagittarius-hour” is a bracelet that the watch puts on his hand, this bracelet is associated with a command console. In the event of a contingency situation, all information is promptly received by the higher-level commanders via secure digital communication channels, including information about the immobility of the fighter during 45 seconds or the fact of removing the bracelet. The developers from St. Petersburg presented at the Interpolitech a modernized version of their bracelet. Now, these smart watch-bracelets are not only able to transmit to commanders information about where his fighters are, whether they breathe, they have received the positioning function on the ground. Bracelet "Sagittarius-Hour" is able to remember the time and point of collection and at the right time pave the way to it. This function should especially appeal to Russian paratroopers, who are often landed in an unfamiliar area. It is impossible to drown out such clocks, as they use in their work Russian communication protocols constituting a state secret. 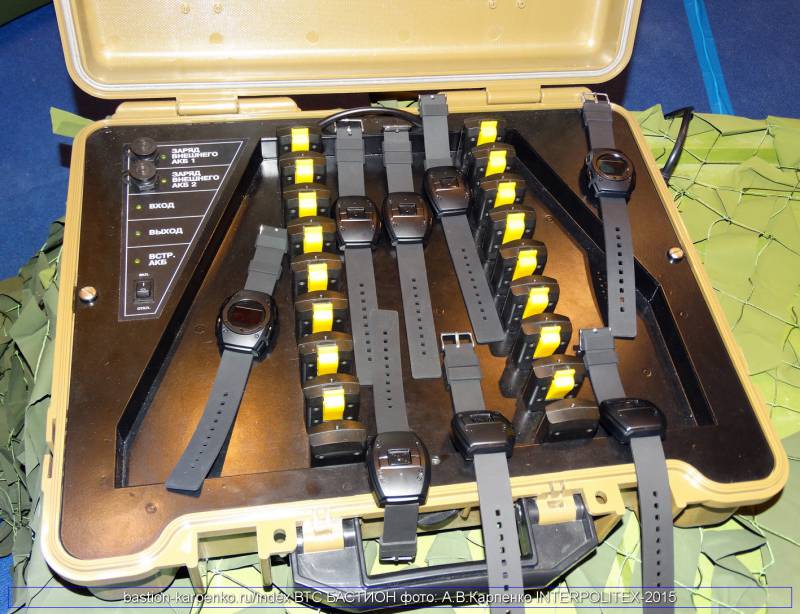 The set of technical means "Strelets-Hour" was designed in conjunction with the Office of the Service of the Troops and the security of the military service of the Russian Defense Ministry, it is reported that it has no world analogues. For two years, he underwent a series of state tests, including even for resistance to a nuclear explosion, in 2015, the Strelets-Hour complex was accepted for supply by the Russian Defense Ministry, Sergey Levchuk told the general director of Argus Spectr.

A feature of this technical complex is that it operates at a distance of 50 kilometers from the command console, providing a confident and stable connection. A module of the domestic navigation satellite satellite positioning system GLONASS was built into each bracelet, which allows you to track the location of each guard in real time. It is also reported that the Strelets-hour bracelet is able to work at ambient temperatures up to -50 degrees Celsius.

Russian paratroopers have already experienced the novelty. According to the press service of the Eastern Military District, during parachute jumps from Mi-8AMTSH helicopters at the Baranovsky proving ground in Primorye in February 2016, the guards airborne assault brigade of the Airborne Forces conducted a test of the alarm-calling alarm system, personal warning and navigation under name "Sagittarius-Watch", which resembles an ordinary wrist watch. After landing, the paratroopers using this device in a matter of seconds were able to determine their location, as well as the place of collection. 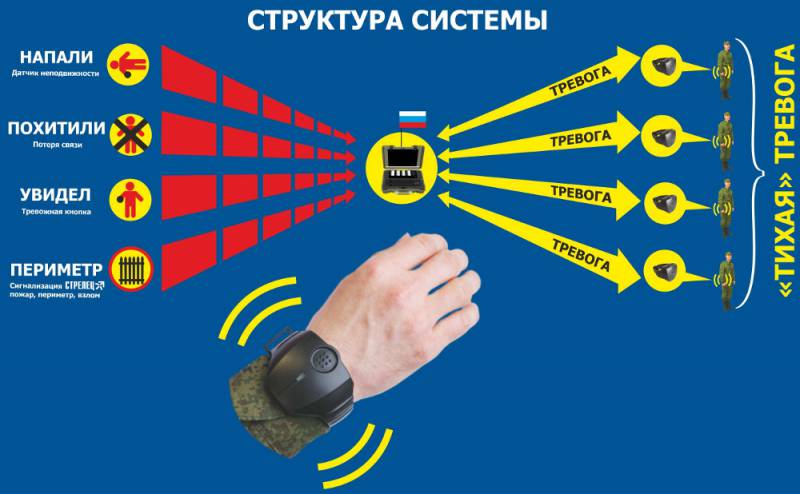 In turn, the commanders of groups of paratroopers, using the system "Strelets-Hour", could promptly send orders and orders to their fighters both in the coordinate system and in the form of textual information. When a conditional enemy was detected without any factors unmasking paratroopers, an alarm signal was immediately sent via a protected radio channel. According to the fighters and commanders of the airborne assault brigade, the use of such devices makes it possible to more quickly and more accurately accomplish the tasks assigned to destroy the enemy's firing points and exit to the specified areas. The military also noted the high survivability of the Strelets-Hourly bracelets, including at low air temperatures, ease of use and autonomy of work.

At the Army-2015 military-technical forum, the success of St. Petersburg developers was noted by Russian Prime Minister Dmitry Medvedev. In October of the same year, Russian Defense Minister Sergei Shoigu made a proposal to test the Strelets-Hour watch bracelets in the Arctic. For these purposes, a special model of bracelets was made. Also, as noted above, the kit was successfully tested by paratroopers of the Eastern Military District. In addition, the Strelets-Hour Watch complex is used to guard the Moscow National Center for Defense Management of Russia. The life of such bracelets, according to the manufacturer, is 10 years.

According to the publication Life, particularly advanced complexes will receive the Crimea, which is today at risk, there is a threat of penetration of the "guests" from the territory of Ukraine to the peninsula. A bracelet that looks like an ordinary watch is attached to the hand of a soldier who carries guard duty. The gadget is directly connected to the commander’s console: all the necessary information about the health and location of the sentry guards flocks to the commander. If on the territory of the military unit outsiders penetrate or abnormal situations occur (for example, the seizure of guards hostages), a fighter with a Strelets-Hourly bracelet can silently press a special button, and his comrades will come to his aid in a short time. The main purpose of the miracle bracelet is to control the situation at the protected objects, to collect and monitor information on the health status of the control participants and the security lines. For example, if an intruder is detected at the object using a bracelet, you can give an alarm to the guard and the garrison daily along. The complex is able to determine the movement of the offender, the place and time of the violation. He is able to provide access control and the conditions necessary for carrying the guard duty. 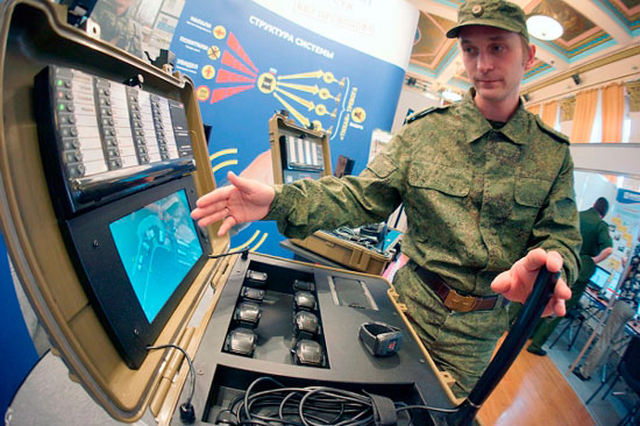 It is curious that from the 396 millions of rubles allocated for the purchase of 85 bracelets are intended to equip with sets of military units located in the Crimea. For example, a set of alarm-ringing system (STVS) of 60 bracelets will go to the military units of the Crimean naval base, which was recreated on the peninsula in 2014 year after its accession to the Russian Federation. At the same time, equipment for the Republic of Crimea is more functional. The kit for the Crimea includes a system of alarm-ringing alarms and personal prompt notification of servicemen; systems of detection and protection against penetration into the inner territory and along the perimeter of buildings and structures; ACS - access control system; SSKU - network computer control system; APS - automatic fire alarm system.

The other parts of the Russian army will receive only an integral part of the entire complex - the PSTS system, which is able to provide a hidden alarm signal from a soldier, control of his location and movements, as well as a hidden notification of his problems (for example, in the event of an attack) of the commander and comrades. 87 of such kits should go to 70 military units, as well as to training centers throughout Russia. Experts interviewed by Life, said that the number of sentries at Russian military sites depends on their specifics. For example, a warehouse with ammunition does not require a large number of sentries, but the situation is completely different if we have a fleet of vehicles. Usually, the equipment is located on a fairly large area, where the movement of the sentries is precisely defined. At such facilities need more security posts.

“Each of the complete sets is determined by a set of equipment. Since there can be 10 posts in one military unit, but the distance between them will not be 200 meters, but 5 kilometers, so the number and composition of equipment will be such as to reach the radio link to these 5 kilometers. The Russian defense ministry decides for itself how many guards and posts they have, how many bracelets they may need, ”Life told reporters at Argus Spectrum.