August 31 2016
66
The project of a promising anti-tank missile system "Cornet-EM" passed one of the final stages. This system has coped with all the necessary tests, the results of which will address the issue of adopting and deploying mass production for deliveries to the troops. Thus, in the foreseeable future, the fleet of ground vehicles can be replenished with new anti-tank complexes, characterized by high mobility and high combat qualities.


At the end of last week, domestic media reported on ongoing work in the framework of the Cornet-EM project. With reference to unnamed sources in the Ministry of Defense, it was asserted that military specialists successfully completed tests of the new anti-tank system. The products presented for inspections successfully coped with the tasks assigned to them, showing their capabilities. According to the test results, it can be argued that the new Kornet-EM anti-tank system is in a high degree of technical readiness. In the near future it is planned to complete all the necessary work, after which the complex can be officially put into service and ordered for deliveries to the troops.

Shortly before the advent of such News A promising missile system demonstrated its capabilities during demonstration events. The first public demonstration of the combat work of the Kornet-EM anti-aircraft missile system took place as part of the international competition for the calculation of anti-aircraft troops "Keys to Heaven", held at the Ashuluk training ground. Calculation of the complex made four launches of guided missiles, affecting all conventional targets. According to the results of these events, the promising complex was highly appreciated by the command of the Aerospace Forces. 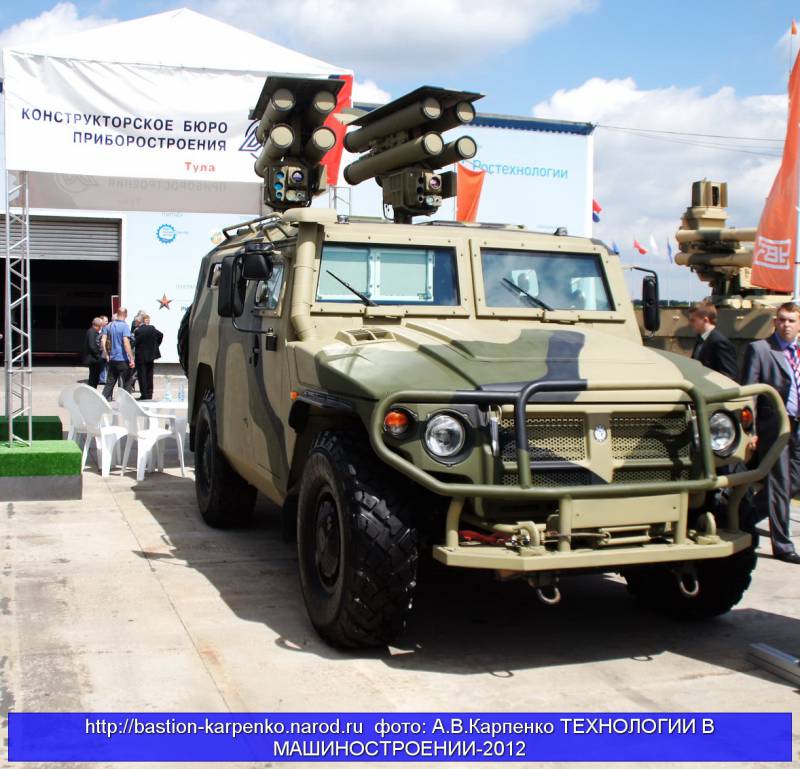 Recall, the Kornet-EM anti-tank missile system, created by the Tula Instrument Engineering Design Bureau, is the latest development of the Kornet family and differs from its predecessors in a number of innovations aimed at improving the main characteristics. Thus, due to the use of upgraded missiles, it was possible to significantly increase the firing range, and one of the variants of the system is proposed to be built on the basis of an automobile chassis, which significantly improves the basic operational characteristics.

The Kornet-EM anti-tank systems (the notation Kornet-D and Kornet-D1 were also used) can use two types of launchers. Direct development of existing units has become a portable system designed for transportation by the forces of calculation. In this configuration, the complex uses a tripod with attachments for control systems and one transport and launch container with a missile. When assembled, such a launcher weighs about 35 kg, excluding ammunition. Despite the need to carry, such a variant of the missile system has all the necessary equipment and is able to fully accomplish the combat missions set, albeit with some minor restrictions.

Another version of the Cornet-EM complex, also referred to as Cornet-D1, was best known. This version of the anti-tank complex is built on the basis of a self-propelled chassis, which can significantly improve its mobility, as well as improve the basic combat characteristics. First of all, there is a significant increase in the portable ammunition, as well as the possibility of attacking two targets simultaneously by the forces of a single combat vehicle. 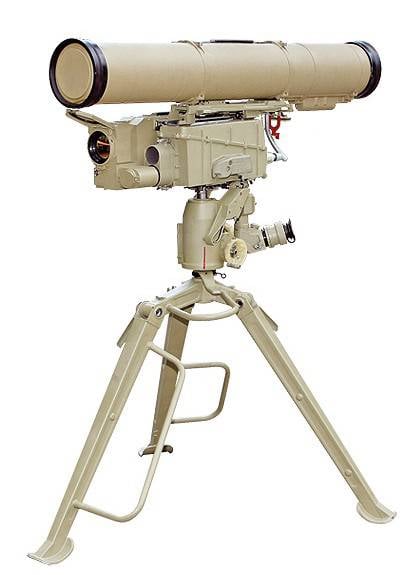 As the basis for the self-propelled missile system, an armored car of the Tiger family with the wheel formula 4х4 is used. Inside the cabin of this machine is set a variety of devices and systems necessary to accomplish the attack of targets using guided missiles. Thus, a console is mounted on the workplace of the operator of the complex to control the existing systems. In addition, two missile launchers are placed in the stern of the vehicle.

The launcher for self-propelled ATGM consists of several basic elements. Four transport-launch containers of rockets are mounted on a common rack, under which there is a block of optical-electronic equipment necessary for searching for targets and controlling missiles. The supporting device of the launcher is equipped with actuators for raising to the combat position with the output of the missiles outside the hull of the base machine. After firing, the launcher may return to the interior of the hull. In this case, the hatch in the roof of the car is covered with a lid placed on the launcher.

The use of two launchers of the new design gives the self-propelled complex a number of advantages. First of all, it is necessary to note a relatively large ready-to-use ammunition consisting of eight missiles in two installations. In addition, up to eight containers with rockets can be stored inside the base machine. Reloading launchers must be performed by the crew manually, after cleaning the systems in the transport position.

The two Kornet-EM launchers are equipped with their own optical-electronic systems, which increases the combat potential of the complex. Using separate systems, the crew has the ability to simultaneously fire two different targets. In this case, for the attack of each of them is responsible for the equipment of a separate launcher.

The optical-electronic launcher system has a high-resolution television and thermal imaging cameras, as well as a laser rangefinder with a missile guidance function. The composition of the missile control system also includes an operator’s console with a monitor for outputting the video signal, automatic target tracking and a set of other equipment. Available equipment allows you to search for targets in any weather conditions and at any time of the day. Search and attack of stationary and mobile targets, including aerial ones at altitudes up to several kilometers, are provided. Provision is made for the use of a remote control that allows the operator of the complex to move away from the combat vehicle a distance of up to 50 m.

As part of the Cornet-EM project, several new modifications of existing guided missiles were developed. These products have a similar design and principles of operation, however, they differ in their main combat characteristics, which is caused by the types of combat units used. Regardless of the modification, the missiles of the complex are placed in a transport and launch container with a length of 1,21 m. The mass of the missile in a container is no more than 33 kg. Rockets have a similar design and layout of internal volumes, but some products of the family differ in their characteristic features. Cylindrical corps of rockets with a streamlined head and tail section of reduced diameter are used. In the head part of the body, arrow-shaped steering wheels are placed, in the tail - stabilizers.

The control system of the complex’s missiles is unified. Guidance is carried out in semi-automatic mode using a laser beam. The operator or automatic target tracking must hold the aiming mark on the target, directing the laser beam control to it. In the tail of the rocket is placed the radiation receiver used to determine the deviation from the desired trajectory. An important advantage of such a guidance system is the extreme difficulty of countering a guided missile. The suppression of the control channel is almost impossible.

For the destruction of armored vehicles ATGM "Cornet-EM" must use a guided missile 9М133М-2. In the head and tail parts of the body of this product are placed the elements of a tandem warhead, between which there is a solid propellant engine. Anti-tank ammunition can fly at speeds up to 300 m / s to a distance of up to 8 km and punch up to 1300 mm of homogeneous armor behind dynamic protection.

A variant of the anti-tank missile is the product 9М133ФМ-2, which is distinguished by the type of warhead. While maintaining the main features of the predecessor’s design, this rocket receives a thermobaric warhead placed at the site of the main shaped charge. The head compartment, in turn, is released. The flight characteristics of the 9М133ФМ-2 rocket correspond to the parameters 9М133М-2. The warhead has an effect on the target equivalent to a high-explosive charge in the form of 10 kg of TNT.

An improved version was created based on existing guided missiles. weapons under the designation 9М133ФМ-3. From the point of view of design, such a rocket differs markedly from other weapons of the Cornet-EM complex, and also has higher characteristics. First of all, the layout of the internal hull volumes was changed. Now, the warhead is located behind the head equipment compartment, behind which there is an oversized solid-fuel motor with increased traction characteristics. The placement of the instrument compartments has not changed.

The 9М133ФМ-3 rocket in TPK weighs 33 kg while maintaining the dimensions at the same level. Due to the new engine, the maximum flight speed was increased to 320 m / s. The maximum firing range is 10 km. Inside the body is placed a high-explosive warhead weighing 7 kg.

The presence of three missiles with different characteristics allows the calculation of the Kornet-EM ATGM system, regardless of its execution, to choose the ammunition that corresponds to the type of target and hit it with the greatest efficiency. Thanks to this portable or self-propelled missile system is able to deal with enemy armored vehicles with a high level of protection, with unprotected equipment, fortifications and manpower. At the same time, protected targets are destroyed at distances up to 8 km, while the 7-kg high-explosive warhead can be delivered to the 10 km distance. In the case of a self-propelled missile system, simultaneous firing of two missiles of one launcher at the same target is ensured. With the joint use of both installations, the Cornet-EM machine can lead to targets of up to four rockets simultaneously. 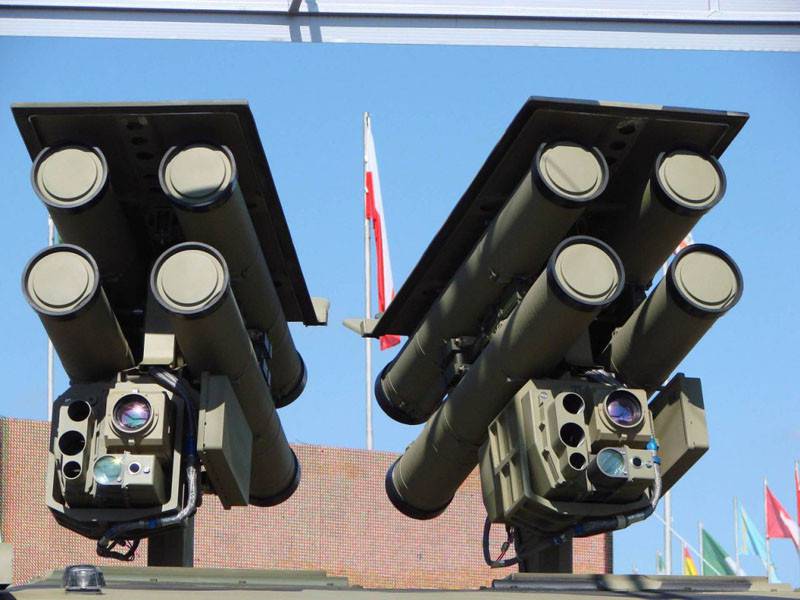 According to various sources, the Kornet-EM ATGM has been developed since the end of the last decade. Already in 2011, the system was submitted to tests that lasted for several years. The test took place as a portable version of the complex, and the system mounted on a self-propelled chassis. Shortly after the start of testing, samples of promising equipment were included in the expositions of various exhibitions of weapons and military equipment. In addition, 9 May 2015, the Cornet-EM complexes for the first time took part in a parade on Red Square.

According to the latest domestic media reports, the currently temporary Kornet-EM anti-tank missile system has passed the necessary tests, which brings the project completion moment closer, and in the near future should lead to the adoption of the system and the start of its mass production with deliveries vehicles to the troops. However, the specific deadlines for completing the necessary work have not yet been specified.

Adoption of the latest anti-tank missile system is expected to significantly increase the potential of the ground forces in the fight against enemy armored vehicles, as well as expand the range of tasks they solve. The development of the Cornet-EM complexes will provide an opportunity to increase the range of target destruction, as well as expand the circle of objects being destroyed.